I mentioned that my room is very small compared to the places I’d lived in the US. As you can see from the picture, I have two desks, one for retro stuff and one for my main PC. To switch from one to the other, I turn the chair around and roll forward about one and a half steps. Kinda convenient but everything is so tight! And my bed basically brushes up against the chair most of the time.

Besides the desks and computers, there’s also a small set of drawers next to my main PC, which holds stuff that I plan to auction, and a rack next to that which holds my projector and my Plus/4 box. Behind the Commodore desk, you can’t see, but there’s a narrow book rack that I use to hold my joysticks and cartridges. And the rack on the Commodore desk is so cheap and flimsy, and tangled up in the monitor stand, that it’s a real hassle to switch out computers and use one of the others.

In other words, just no space! 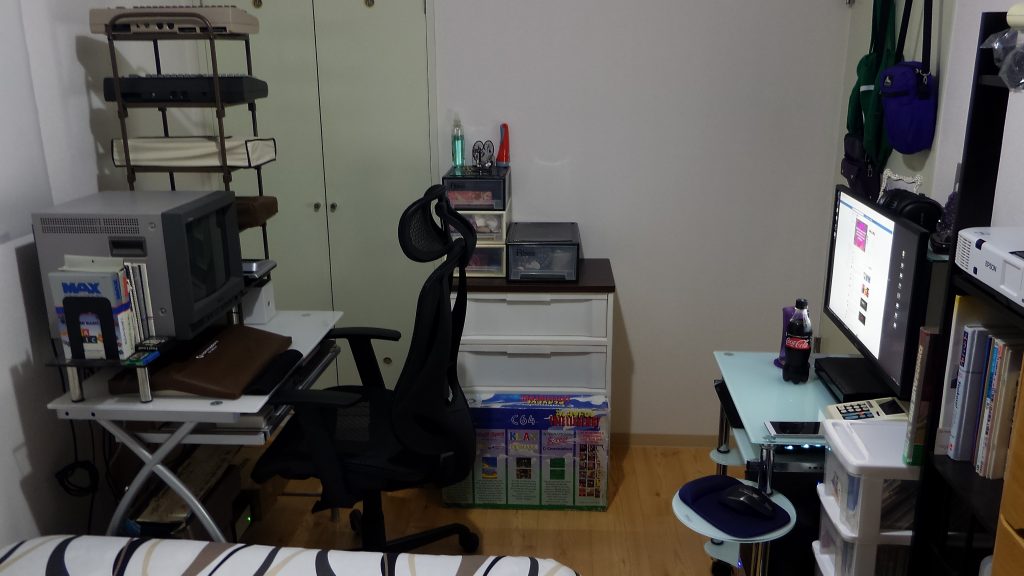 But that’s all about to change! I am moving. Still within Japan, and actually still within the same city, but my wife and I have decided to buy a house. It has about 40% more space than my current apartment, and I will have about half of one room dedicated to the computer collection! I’ll probably end up getting one or two additional computers, but mostly I am going to take the opportunity to spread out a bit and enjoy some space!

I’m Sean. I grew up in the 80s, with a deep fascination with computers. My first experience with computers was at my aunt and uncle’s home. They’d recently acquired the first computer of anyone in my extended family – a Commodore 64. Until I saw that computer, the closest experience I’d had was playing my Atari 2600. A keyboard was a fascinating way to interact with an entirely new world of electronics. I was hooked. My family couldn’t really spare the cash to just buy a computer, so my mother encouraged me to save money from my modest income, which I earned by helping her fold gowns from my uncle’s physical therapy practice. After about a year, I’d saved enough to buy a Commodore 64 of my own.

But I didn’t have to. At almost the exact same time, my father’s boss decided to upgrade from his Commodore 64 to a PC. So he gifted me his system – a Commodore 64, a 1702 monitor, a 1541 disk drive, a joystick, and The Bard’s Tale. There were probably a few other things included, but that was my main memory of it. I also remember going to Target the next day and buying a two-pack of games – Frogger (if you have to ask…) and Threshold (a space shoot-em up game).

I grew up in California, where I had something that I wouldn’t really appreciate until later in life – space. Ample space. More on that later, but it afforded me the luxury of my own room and a place to hide out and play with my computer setup. This was a major factor in shaping me during my formative years. Namely, I became a hermit and an introvert! With so much time to fill, RPGs were a natural match for me, and I quickly became a completionist. I spent many hours until the sun came up, looking for every last item, every tiny detail, and every exploit that RPGs of the time allowed (or didn’t prepare) for.

I moved into my own apartment in my early 20s. It was an unbelievable location – a huge loft directly over the office I worked at, and I was permitted to live there rent-free, in exchange for being on call 24/7. My boss was a nice guy, though, so rarely called on me at indecent hours, such as 9 in the morning. In that apartment, I entered my most aggressive phase of computer collection, with about thirty vintage computers, all set up and working, either with a dedicated monitor or a couple of computers near each other that would share a monitor.

Fast forward another ten years, and I found myself a pretty changed person. I’d given up the computer collection in favor of arcade games (had about twenty-five – space is so good!). I was more social; I had started enjoyed going to dance clubs, having house parties, etc. But perhaps most surprisingly, I’d made the decision to move to Japan.

So that’s where I am now. I love it out here. It’s quite safe, it’s comfortable, it’s convenient, and the food is delicious. I have a beautiful and understanding wife. I have a healthy and sometimes rambunctious but (usually!) kind son. But there’s one thing I didn’t have: a vintage computer. So after being out here for seven and a half years, I changed that. I joined Yahoo Auctions (no eBay out here).

You can take a horse to water, but you can’t make an overnight MSX fan out of a Commodore fan. A Commodore guy in Japan, I joined a very niche market with high price tags and limited availability. But Commodore had a Japan division, so things are also kind of interesting. I started my new 8-bit journey with a Commodore MAX Machine – a completely unique looking machine from the Commodore Japan 8-bit line. It was released at the same time as the Commodore 64 was released in Japan, but it was a far more limited machine. You can find details about that in the MAX Machine posts.

So I lied, there’s a second thing I don’t have out here… a lot of space. So that’s kind of what this blog is about. Being a Commodore fan in Japan, details about my acquisitions, and the torture I put myself through just to fit it all in my room.