It’s of course always great to know someone in your vicinity who is a Commodore fan, but in Japan, that’s quite a tall order! Fortunately, I live just outside of Tokyo, so there are a lot of people nearby, so at least one of them was bound to like Commodores, too. By chance, I learned that someone else from the Commodore 64/128 Facebook group lives in central Tokyo. We met over beers the first night, talked a bit about this and that, including Commodores, and we have been in regular touch ever since.

This friend knows how to solder, and I have no valuable skill to offer in return, so that’s great. We met on Monday this week and did assorted troubleshooting, and while we were at it, we performed the previously mentioned “one-wire mod.” And by we, I mean he, of course. Pretty sure I learned a bit about technique by watching him, though.

The idea is pretty simple: the VIC-II outputs to the RF adapter, so we steal that signal and re-route it to the audio jack. Since the audio jack port has two output channels available, but is only using one (sort of*) it can handle the video, no problem. 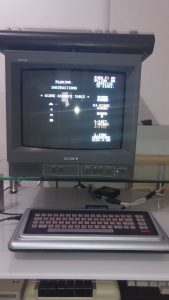 and there you have it!

*Mine required a bit more work, as I had a “revision B” motherboard, which actually uses the second audio channel, but not for anything the MAX Machine can actually take advantage of. We had to remove a capacitor to retake control of the second audio channel. It was for audio input, so perhaps they planned for the possibility of using that in future software, but the machine’s history was cut short.

I have Avenger (Space Invaders clone) and Music Composer as native MAX Machine cartridges, and was pleased to learn that some of my other cartridges from my Commodore 64 also worked: Jupiter Lander, Visible Solar System, Radar Rat Race, Kickman, and Sea Wolf. After reading up on things, I’m not sure why my Omega Race cartridge doesn’t work on my MAX Machine, but it doesn’t. 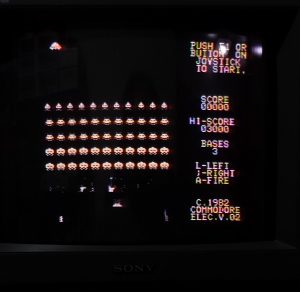 There may still be room for improvement in video quality. The attached photos look pretty good, but there is a ghosting effect that the photos aren’t showing. There may be some adjustment I can make within the RF adapter, or if I feel ambitious with the soldering iron, I can even alter the “single-mod wire” to a two-wire mod and create an S-video connection. But for the time being, I’m totally thrilled to have this piece of Commodore history up and running!