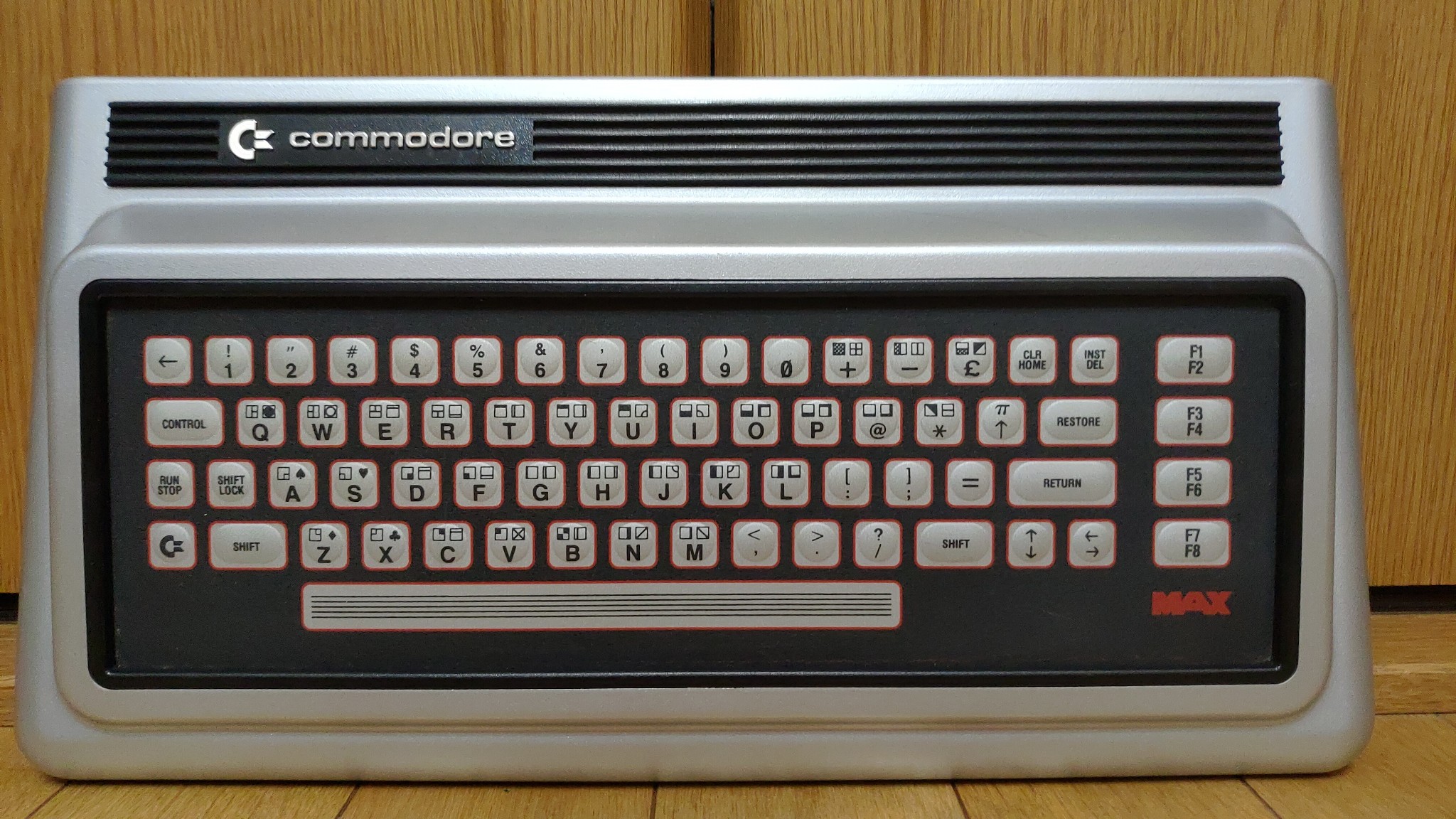 When I think about my Japanese vintage computer collection, I tend to think of the FM-77 (which I no longer have) as my first system, and the Sony HB-F1XD as the one I’ve had longest. But neither of those are true. My first computer in this collection is the MAX Machine. It doesn’t come to mind first because I tend to group Commodore separately. And admittedly it doesn’t get used much, because it does nothing that my Commodore 128 can’t do. But it’s still an interesting piece of computing history!

It shares some important technology with the Commodore 64. The CPU is the same 6510 that pushes the C64. It also has a VIC-II chip that is essentially the same as (but actually not compatible with) the one in the C64. And every MAX Machine packs a 6581 SID chip.

How is it different? Well, let’s start with appearance. Before the familiar brownish-grayish C64s were released, the MAX Machine came with this, in my opinion, beautiful-looking silver and black machine with red accents. Where it starts to fall apart is the keyboard. It’s a full keyboard, but it’s a membrane keyboard. For a little back-and-forth between menus and such, it’s not that bad, but I don’t think you’d want to do much serious programming on it.

Not that you could, because the machine only had 2KB of memory instead of the 64KB of the C64. The only two programming languages I’m aware of for the MAX Machine are Mini BASIC and MAX BASIC. Mini BASIC only had about 512 bytes (bytes!) of BASIC memory. MAX BASIC, on the other hand, has an additional 2KB of memory on the cartridge itself, so it can load BASIC into the machine’s memory and have a whopping 2047 bytes of BASIC memory for itself.

If you notice above, the program output is not as expected. I think this is probably not a bug in the programming language, but perhaps indicates bad RAM, either on the cartridge or in the machine. Other games don’t seem to have any problems, though.

Many of the ports are the same as a C64. It can support a datassette, the joystick ports are the same (and actually have a better arrangement, one on each side) and the PSU is the same. The AV port does not exist, so the MAX Machine could originally only display over RF. One big difference is the existence of a dedicated audio port, which happened to be stereo. This is tremendously useful for a hack to get composite video coming out of the MAX Machine.

What about software? Well, it’s pretty limited. There were only a handful of cartridges available, and I believe all were made by HAL Laboratories specifically for Commodore. Many of these games had previously been released for the VIC-1001/VIC-20, and many were also made available on the C64, either exact replicas or improved versions. Many of you will probably recognize this one by picture alone.

But if not, it’s Avenger. The next one, though, looks quite a bit different from its C64 version, and the music is different, too.

Well, *that* one is sure off-center. But you probably recognized it as Kickman, anyway. In addition to BASIC programming, there were two music creation programs and Visible Solar System available, so productivity (of sorts) and education were also possible on these machines.

And there were a handful of games that I don’t believe were released on the C64. For example, Bowling and Slalom.

Although these games weren’t released for the C64, they *are* compatible. MAX Machine cartridges plug right into a C64 or C128 and load fine.

Another influence the MAX had on the C64 is that the C64 implemented what is called MAX mode. The intention was for compatibility with these games, but your favorite fastloader/freezer/replay etc tool for the C64 probably plants itself firmly in MAX mode to operate without impacting the C64’s memory, and to be able to operate independently from the other program you are running.

The box was also totally different from the C64’s many boxes. It follows the machine’s black and silver theme with a heavy helping of blue.

By the way, all of my software in this post was launched from a MultiMAX cartridge, designed by Rob Blake and Michal Pleban and this particular one was made by Sven here in Tokyo. The MultiMAX has all known software for the MAX Machine, including alternate versions, and if it actually still runs on a MAX Machine, the updated C64 versions. Pretty slick and convenient!

I do have some of the original cartridges, but they’re hard to find!