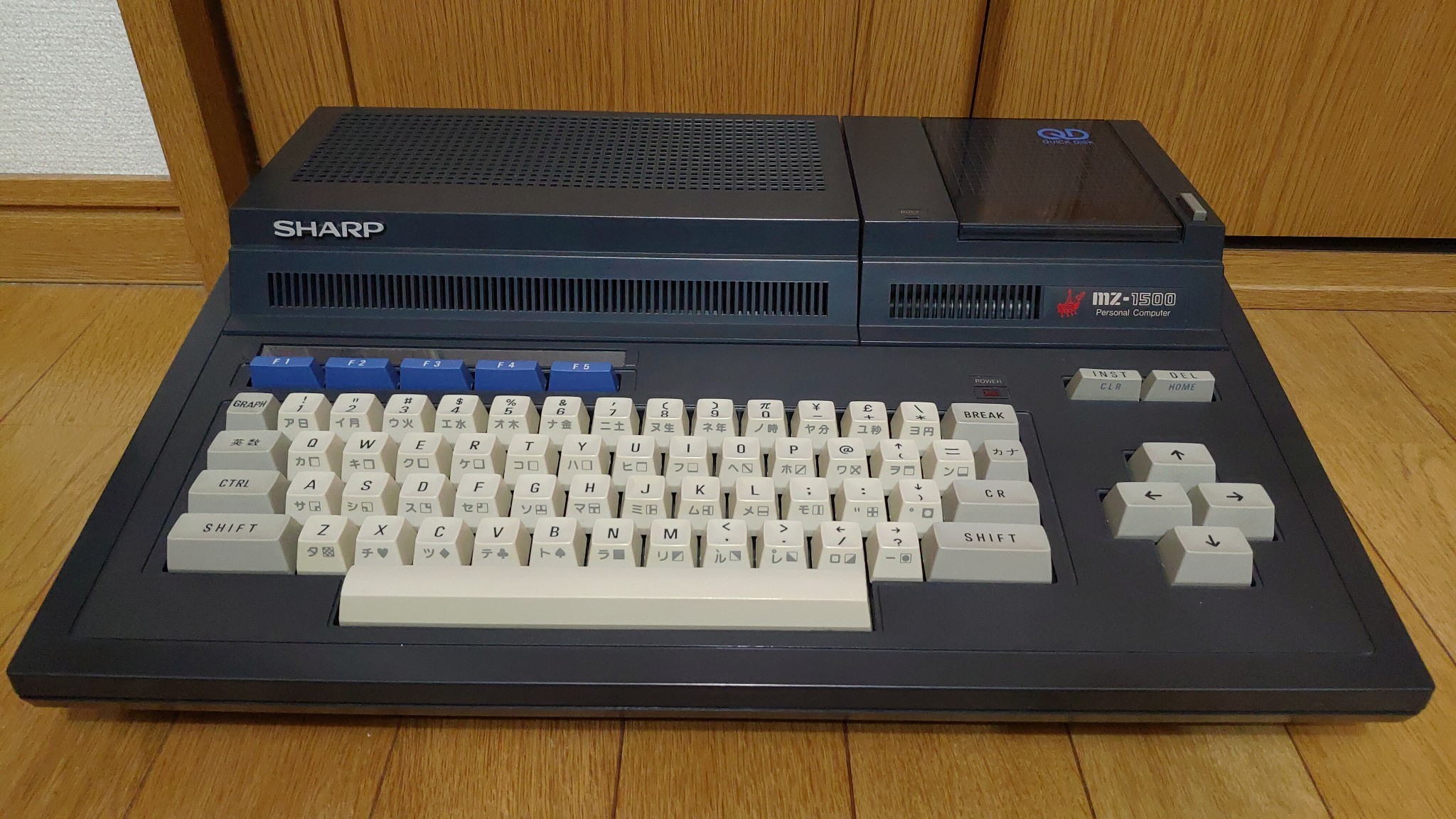 Sharp is heavily represented in my collection, but there are a couple of reasons. They are divided into two groups: computer division (MZ series and the oddball PC-3100) and home electronics division (X1 and X68000), which I don’t think happened at any other manufacturer. Another is that they’re just so cool-looking.

And this MZ-1500 is no exception. It’s got a black and white with blue accents theme going on. The MZ-1500 is a successor to the MZ-700, with a few key differences: it comes with a PCG (programmable character generator) for improved graphics, has improved sound, and its Achilles’ heel, it replaced the integrated tape drive with a QuickDisk drive.

Let’s compare the Mz-700 version of Pac-Man and the MZ-1500 version of Pac-Man. The MZ-700 had no graphics mode and drew its games using large pixels or symbols from the built-in character ROM. The MZ-1500 has true graphics modes, and the difference is pretty clear. The MZ-700 has a PCG expansion option, but it is rare and expensive and my understanding is it doesn’t work as well as the MZ-1500’s built-in PCG.

The concept of the QuickDisk is pretty cool, it is a slick integration with the system much like the tape drive on the MZ-700. And now the QuickDisk is a boon to my collection because of its rarity. But the QuickDisk was supposedly a means of avoiding the more expensive emerging standard of 3.5″ floppy drives. Now it’s quite difficult to find QuickDisk media, and when you do manage to find any original games, they’re often terribly expensive. I was given a backup disk with my system, it contains BASIC. I also happened into an extra blank disk a short time later.

The disks are also only 128KB in capacity, making them about 2.5x smaller than the smallest-capacity 3.5″ floppy drives. They are at least a dramatic improvement over tape speeds.

The MZ-1500 is a Z-80 CPU-based machine with the main system memory weighing in at a fairly standard 64KB. But one outstanding feature is the dual-sound chip setup. It has two SN76489 chips, giving it six octaves and the capability of producing sound in stereo.