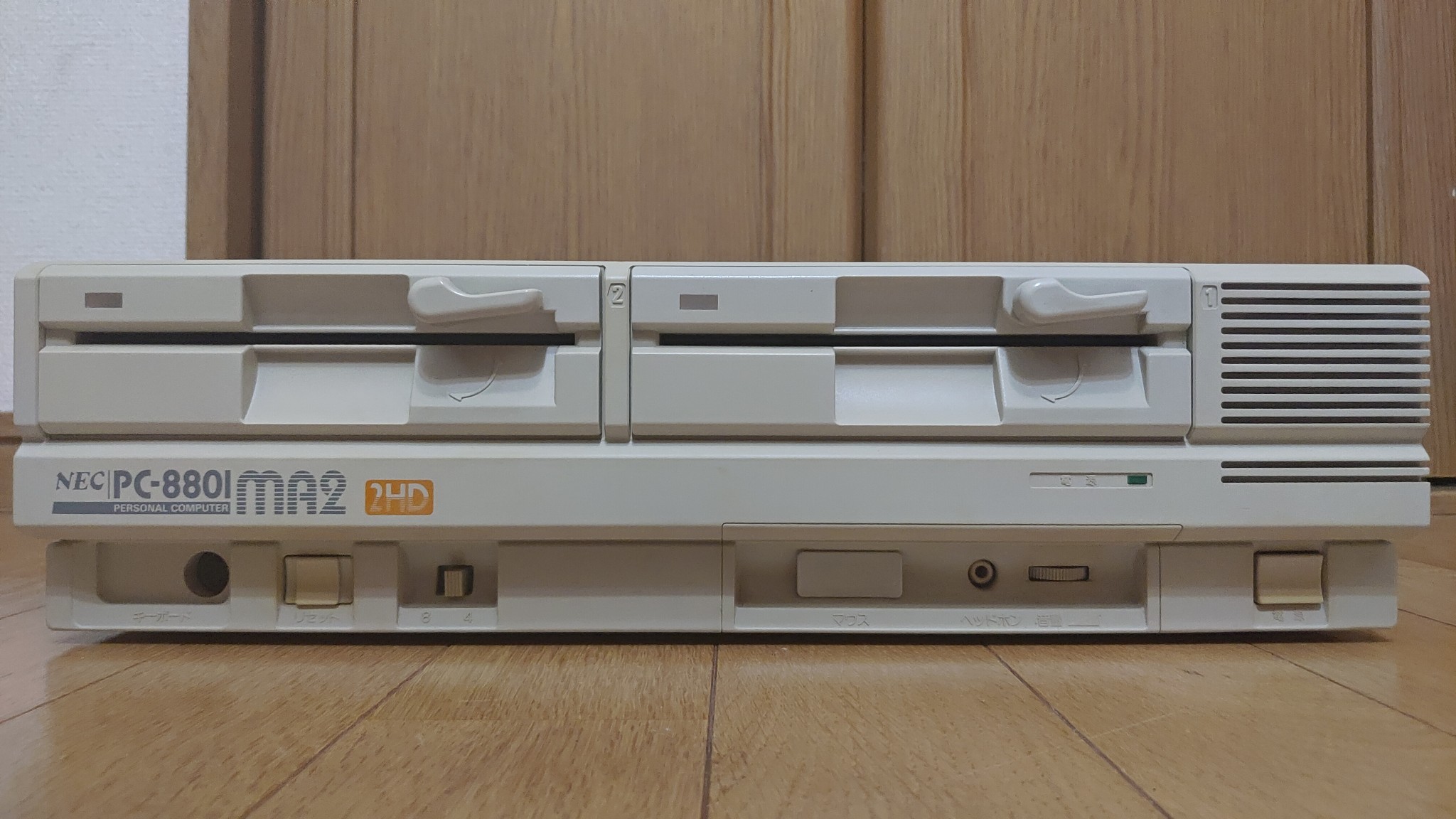 I was a little hesitant about this one at first. I couldn’t tell if I had a few bad disks or if there was something wrong with a drive or the controller, but I’m growing a little more confident that the disks were at fault and the computer is fine.

This is another Yahoo Auctions purchase. The system itself is in fantastic shape, but it came with a yellowed keyboard, which I replaced with a much nicer looking one as soon as I could. Here is the system in its current state.

This evolution of the PC-8801 series keyboard is very interesting. It has some new keys that the PC-8801mkII didn’t have, most notably the PC key. We’ll see how that key is used later. But even more eye-popping, NEC decided to translate almost every key into Japanese.

It’s another Z80-based machine, but this one has a switch allowing it to run at either 4MHz or 8MHz. For games that I’ve seen thus far, they should all run at 4MHz, but I suppose applications would benefit from the 8MHz switch. It also comes with 192KB of RAM, two high-density floppy drives that can also operate on double-density disks, and a large kanji ROM for facilitating Japanese text. It’s quite a sophisticated 8-bit machine.

When I turn it on, it displays its graphic mode in large green letters and then has one of two options. The first is booting directly to internal BASIC on ROM, and the other is booting from floppy disk.

If we boot to BASIC, we are greeted with the “How many files?” prompt. Enter the number of files you think you will need to keep open simultaneously and proceed. I find that zero works well enough for most situations, certainly this one. Here I’ve booted into the monitor and pressed the “Help” key, which brings up this command screen.

I ran the memory test with the “tm” command. It provided a series of alarming garbage to populate the screen, but then it became kind of colorful and comforting as it seemed to pass through the test without issue.

If you choose to boot from disk, you should insert them before turning on the machine, because if you don’t it will eventually time out and ask you to put the disks in the drive. I’ve booted a couple of games I had lying around at the time – Nintendo Golf and Haja no Fuuin. The picture on the left is from the golf game.

So how do we tell the computer whether to boot from disk or ROM? Unlike previous versions of the PC-8801 series, you set it in a function similar to a modern PC’s BIOS. This is pretty interesting to me. When you want to access the BIOS, turn on the system while holding down the “PC” key on the keyboard. It offers four screens of configuration options and even responds to the help key, displaying a different help screen for each configuration screen.

One thing I haven’t quite figured out about this system is the lack of joystick port. I’ve seen someone on Yahoo Auctions plug a joystick into the mouse port, but I don’t think that’s correct. None of the ports on the back support a standard joystick. I know for PC-98 series machines, joysticks come in the form of piggyback-ready keyboard controllers, perhaps the same is true of the PC-8801 series, but I’ve never seen one!