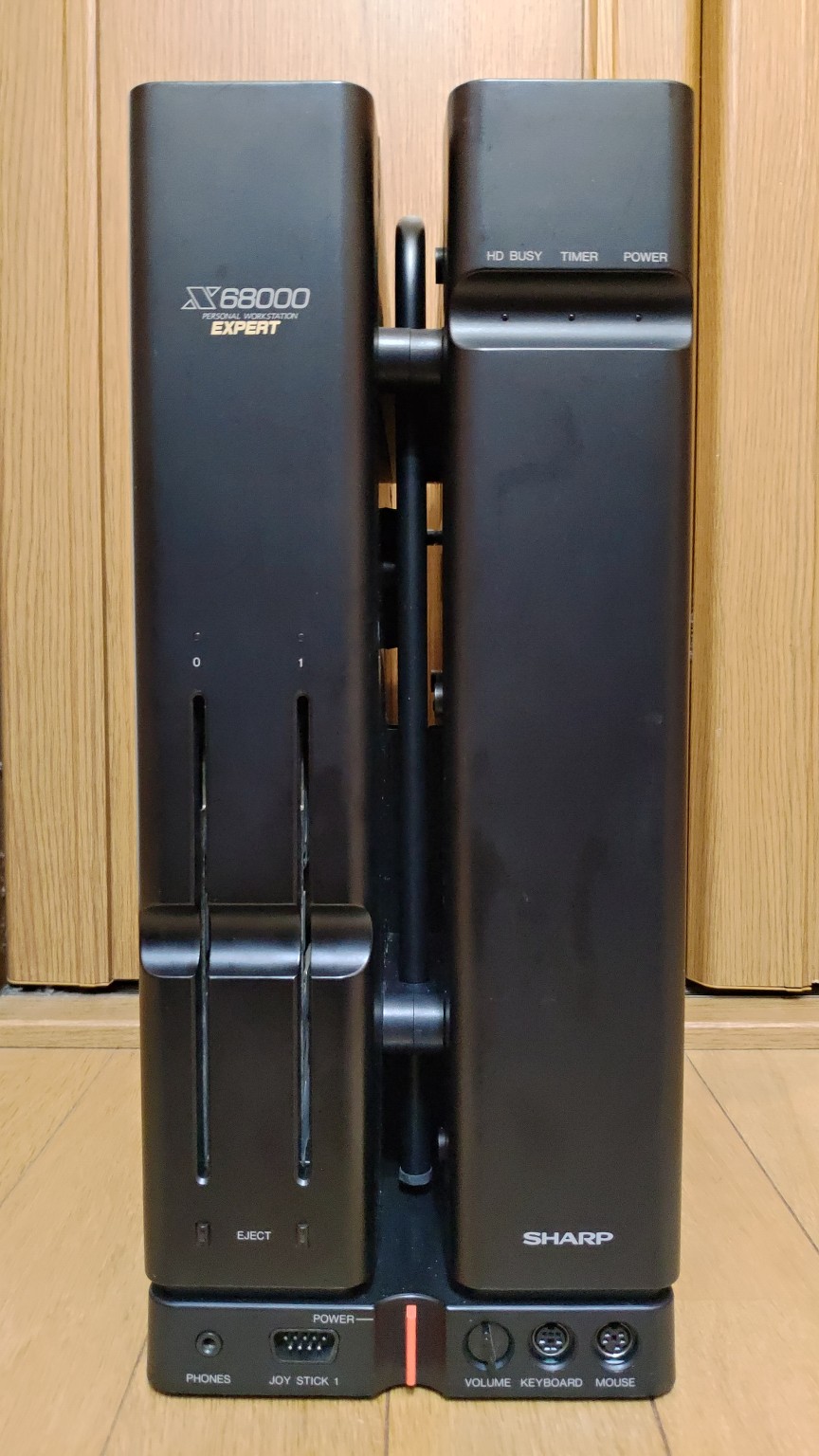 Now I will take the opportunity to post about my X68000 Expert itself. As I mentioned in my previous post, which details the various stops along the way of getting an X68000, this was a serviced and guaranteed working system, meaning it was not cheap. But these are such problem-prone machines I wanted to have the best chance possible of continued operation.

The machine is in very good, but not perfect, cosmetic condition. All cosmetic flaws are easily overlooked by focusing on the unique and elegant design. There’s just nothing like this, past or present, and probably not in the future, either.

The official peripherals are also quite unique. There are many keys on this system that you won’t find on most other machines, and I’m not just talking about the Japanese entry keys. There are option keys and XF keys and other keys, many of which I still haven’t figured out the use for. I’ll need to spend some more time exploring this system, for sure. There are also a lot of keys that have status LEDs directly on the keys, which can make for a cool effect.

The mouse, too, is very clever. It has a mouse mode and a trackball mode. To switch into trackball mode, turn it over so the ball rolls to the top of the mouse’s body, and lock it in place by sliding the selector on the bottom from M to T. Then remove the cap from the top of the mouse. To put it back in mouse mode, just reverse the process. There are also two left buttons and two right buttons, one set on the top and one set on the sides. The mouse body can also be rotated 90 degrees, which I assume is for trackball mode should you want your buttons on the side instead of in front of the ball.

The underlying OS is called Human68k and certainly resembles DOS, although it appears to be different under the hood.

And much like MS-DOS has Windows, Human68k has SX-Window. It is not really multi-taking, just provides a simple GUI for common tasks. In a way, it reminds me more of GEOS for the Commodore 64. This is a basic version that is designed primarily to launch Gradius, but you can do things like copy files, make folders, set up the system timer, make notes, etc.

The software bundled with the system also includes a word processor, which, as far as I can tell, is called 日本語ワードプロセッサ, which translates to “Japanese Word Processor.” Clever name, fellas. It might be a bit under-featured for its time, but I guess the only thing I can compare it to is Word Perfect for DOS, which I suppose was ahead of its time, so perhaps this was the average? It’s a GUI-based WYSIWYG word processor, except I don’t think the WYSIWYG is 100%. Maybe 80-90%. Anyway, here it is, processing words.

The OS and productivity applications are interesting to me, but this system is about games, games, and more games! The X68000 is legendary for games. Famously, Capcom did their contemporary arcade game development on these machines, so the X68000 home versions might be identical to the coin-op version. Other companies also made stellar games because this system packs a serious graphics punch.

Here are some popular games in action: Gradius and Daimakai Mura (Ghouls n’ Ghosts, one of Capcom’s releases). As this isn’t a game introduction, I’m not going to explain much here, just a bit of showing off graphics. But look at the detail in the background of Daimakai Mura, it’s so meticulous!