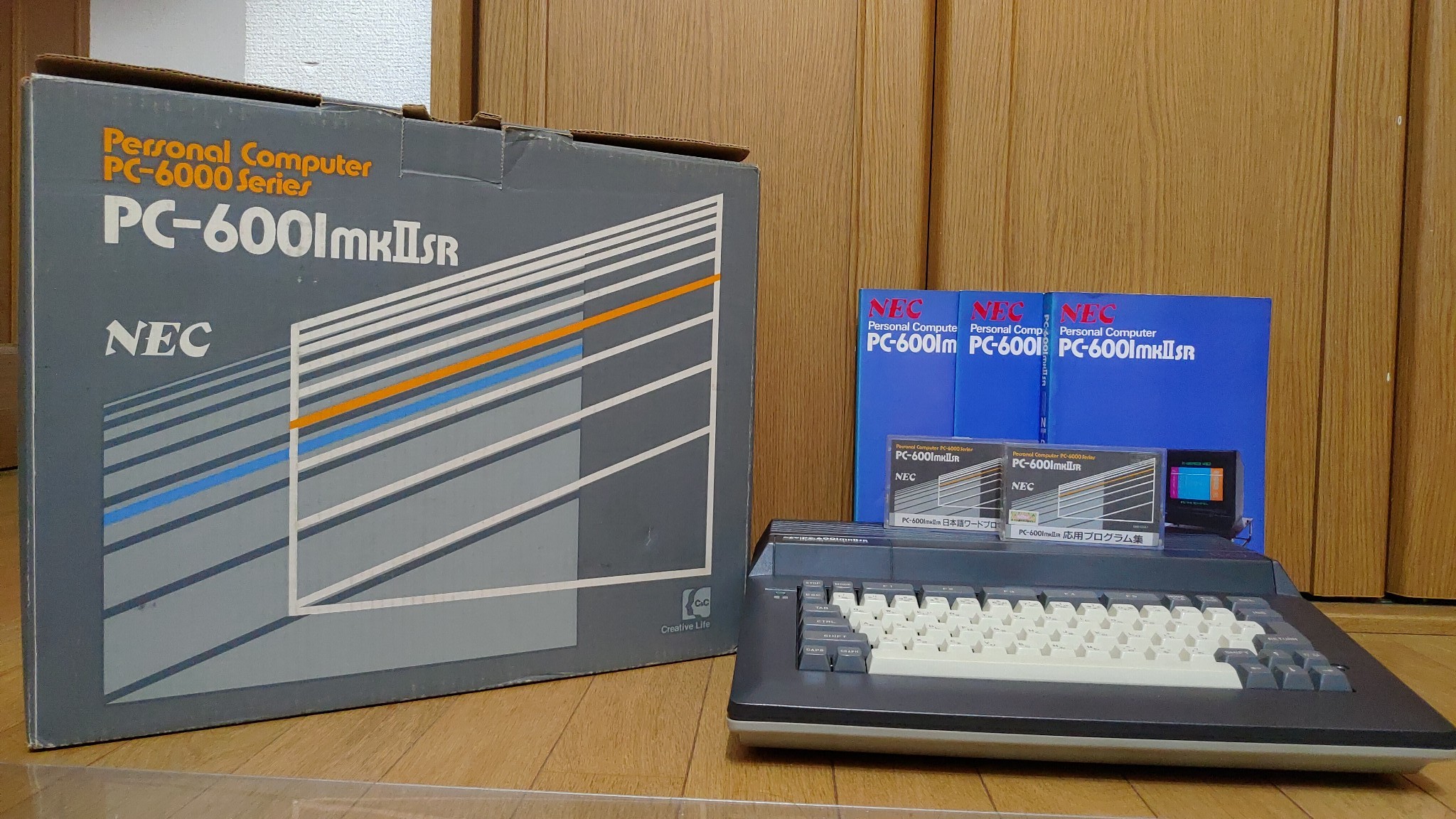 Over the past year and a half or so, I’ve worked my way up from the PC-6001 to the PC-6001mkII, and now I’ve made it to the final stage in the series, the PC-6001mkIISR. I was not expecting to get this machine because it usually ends up around 25000 yen for just the machine, but here was a full set including box, manuals, and demo tapes, with the machine powered up and shows to be working to the main menu, for a good chunk less than that.

Actually, although it was shown in the auction to be working up to the above screen, the computer was not well at all. If you started in modes 2 or 4, the computer would fill up with corrupt graphics, a sign of bad RAM. In modes 1, 3, 5, or 6, it would look okay at first but fail to load games, and would still show the same corrupt graphics if you changed the current memory page. In addition, even if you thought you’d just poke around with BASIC a bit until the memory problem was solved, the PSU started making a horrible noise.

My friendly technician and patient friend Edoardo gave it proper treatment. He replaced the PSU with a new one, added ZIF sockets for the RAM and replaced the memory chips, and recapped the motherboard. When he brought it back to me, it was good as new. When he recaps a machine for me, it really helps cement its place as a permanent member of my collection. In addition, the machine is in amazing cosmetic condition. I mean, just look at it!

The box, manuals, and tapes were also in surprisingly good shape. I am not much of a box guy, being in Japan with limited space, and often see it as a mild deterrent to purchasing, but it sure does look pretty handsome. The manuals do show a bit of wear but not so bad

After getting it back, I threw Pac-Man at it. It runs in mode 5, which utilizes the full 64KB, and the game takes nearly 10 minutes to load from tape, so in my mind it’s a pretty thorough memory check but in reality I have no idea. In any event, it runs well and looks beautiful with its sharp digital RGB colors.

The main thing it’s missing that the PC-6001mkII had is composite output. Digital RGB is extra crisp, but composite sometimes outputs the “correct” colors. There are two main examples I can think of for this: Dig Dug and Eggy.

Dig Dug is a little bit subtle. It’s already a colorful game with some unnatural choices, so if you don’t pay much attention to it, it probably goes unnoticed. But the bottom layer of dirt and the rocks are brown over composite, but they’re magenta over digital RGB. The colors in the high score chart are also a distinct color for each entry in composite, but there is overlap in digital RGB because they’re being interpreted as the same color.

Eggy is a bit of a surprise. Actually, Eggy is essentially a black and white game, but it makes use of NTSC hacks to generate color. It’s really quite a feat because it looks very colorful! When you play it over digital RGB, while it does look crisp, it’s completely black and white!

Like the PC-8001mkIISR and PC-8801mkIISR, the main distinguishing feature between SR and non-SR models is advanced sound capabilities. It has almost everything the PC-6001mkII has, but adds an FM sound generator and includes two (male and female) digitized voices. They speak only in Japanese so it’s kinda cheating as there’s little challenge in pronunciation, but it’s an amusing extra.

It also comes with a “digital telopper” option, which prepares the output from the computer to be recorded. This is a feature usually reserved for the flagship computers such as the X1, FM77AV, or PC-8801’s upper-end models, so it’s pretty surprising to see it on this final iteration of NEC’s low-end line.