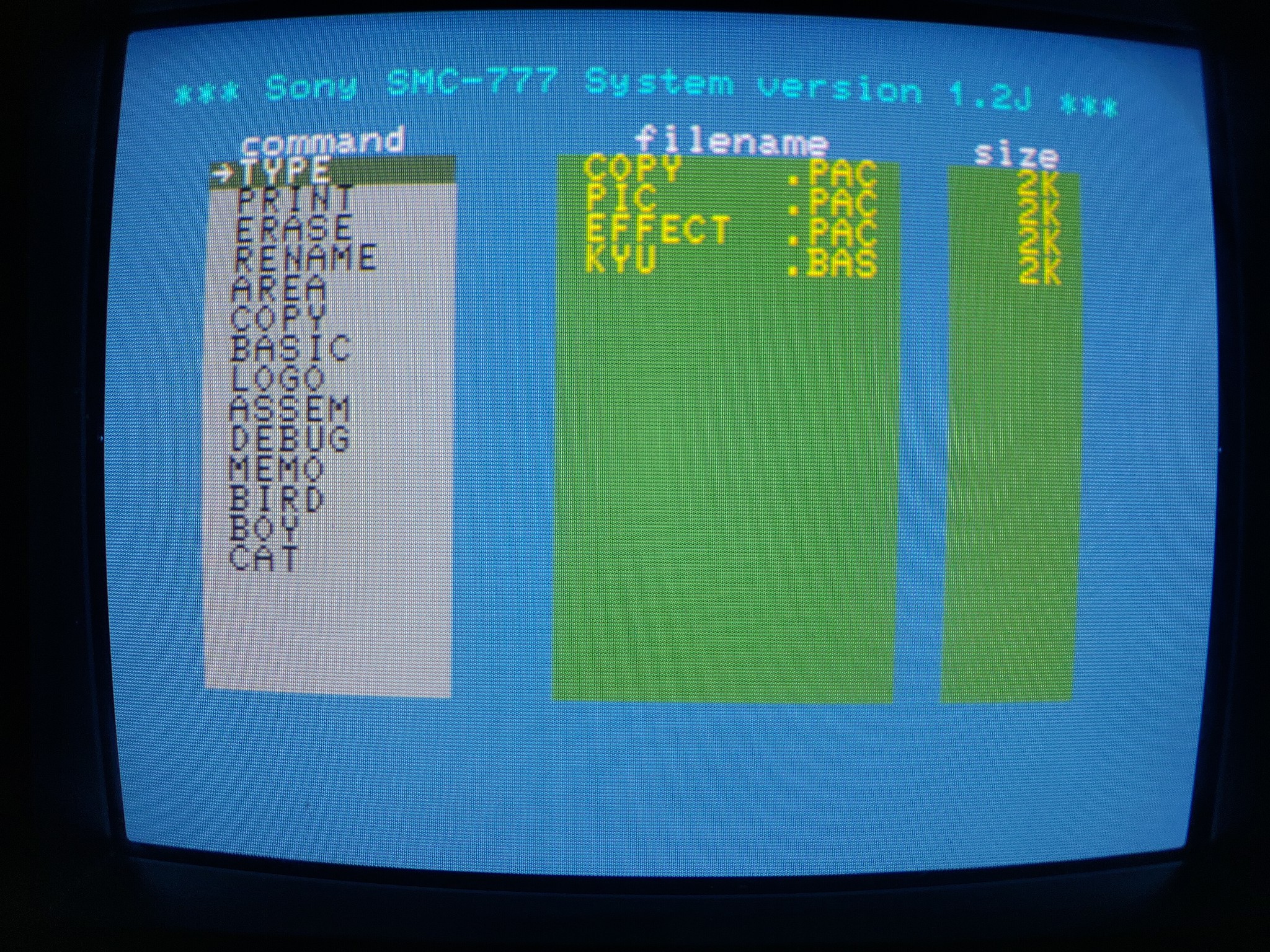 I had been looking with curiosity at the SMC-777 series from afar, interested in the machine but not interested in the price. And then one day, on Mercari, I happened to find an SMC-777C for 10000 yen! For this machine, that’s a steal. So I bought it.

This machine has quite a unique design to it, from the location of the integrated floppy drive (did the ill-fated Commodore 65 take a visual cue from this machine?) to the shape of the keys with different sections of the keys outlined in different colors, the unusual approach to the function keys, the directional pad, etc. I was excited to try it!

Unfortunately, it didn’t turn on and that’s when the price started to balloon out of control. I paid my trusty repairperson for a recap and new PSU replacement. While it was under repair, I found the original system software for the SMC-777 (not the C model), which is awfully rare so that ended up costing me quite a bit, unfortunately. But it’s really quite a treasure trove of software and manuals, and Sony definitely gets an A+ for presentation. The lot also contained two 3rd-party books

Once I got the machine back, it powered on and I was able to use it to some extent, but it wasn’t yet 100% operational. My repairperson had to do a blind recap because he doesn’t have a display device that supports digital RGB and the analog RGB connector on the back is somewhat unusual. When I hooked it up to my display, it powered up to a memory error screen. Pressing the reset button actually allowed it to boot from floppy disk into the main system software, but most of the included programs would crash. I picked up some spare memory and had the existing memory socketed so I could try to find out which memory chip(s) were bad. At long last, months after buying it, I have a fully functioning SMC-777C!

Under the hood, the first-gen SMC-777 may seem a bit underpowered compared to its peers, if anything. it’s got a Z-80 CPU and 64KB of RAM but only 32KB of graphic memory. It was limited to 16 colors in 320×200 or only 4 colors in 640×200. Like the MZ-2500, though, there was a “palette board” released for the system, expanding the color display to 4096 colors. Perhaps sensing that everyone would want that, Sony added the palette board functionality as standard to the SMC-777C. I didn’t realize that when I was debating the purchase of one of these computers, but I am quite lucky I ended up with a C model.

To round off this system’s introduction, I will talk about some of the software included on the system disk. It loads up into the above pictured menu, which you navigate with the keyboard’s arrow key pad.

In terms of productivity, the disk includes a suite of programming options, a utility, and an application. As expected, there is a version of BASIC, but uniquely, they also coupled the system with a version of Logo (I believe some versions of the FM-77 also included this), and an assembler and debugger (maybe I should at least learn to do some simple machine language program so I can include photos next time). There is also a simple utility that just shows the amount of free “area” on the disk. And the application is a spreadsheet tool that includes some basic functionality. Someday I will read through the manual so I can make optimal use of it.

All work and no play makes for a boring SMC-777C so they also included three games. For what they are, I think they’re pretty fun.

First is an inverted Block-kuzushi/Breakout style game called “Bird crash!”. You have to eliminate the blocks in the middle of the screen by using your owls (I think?) to scare the bird away from the edges. If the bird escapes, you lose a life.

The next game is Mysterious Boy, a slow-paced action platformer. Climb up the screen and collect weapons, bonus points, and a key to escape the door at the top.

And finally is Pink Cats, the title being a bit strange because so far I’ve only encountered pink dogs and black cats. You walk around the garden, keeping your plants hydrated while the rambunctious pink dogs obliterate your plants by running into them, and the black cat tries to kill you. Actually I haven’t read the manual, it may not be so sinister that the cat kills you, perhaps you just have an allergy.

All that and more in a single 280KB 1DD disk, that’s pretty amazing!