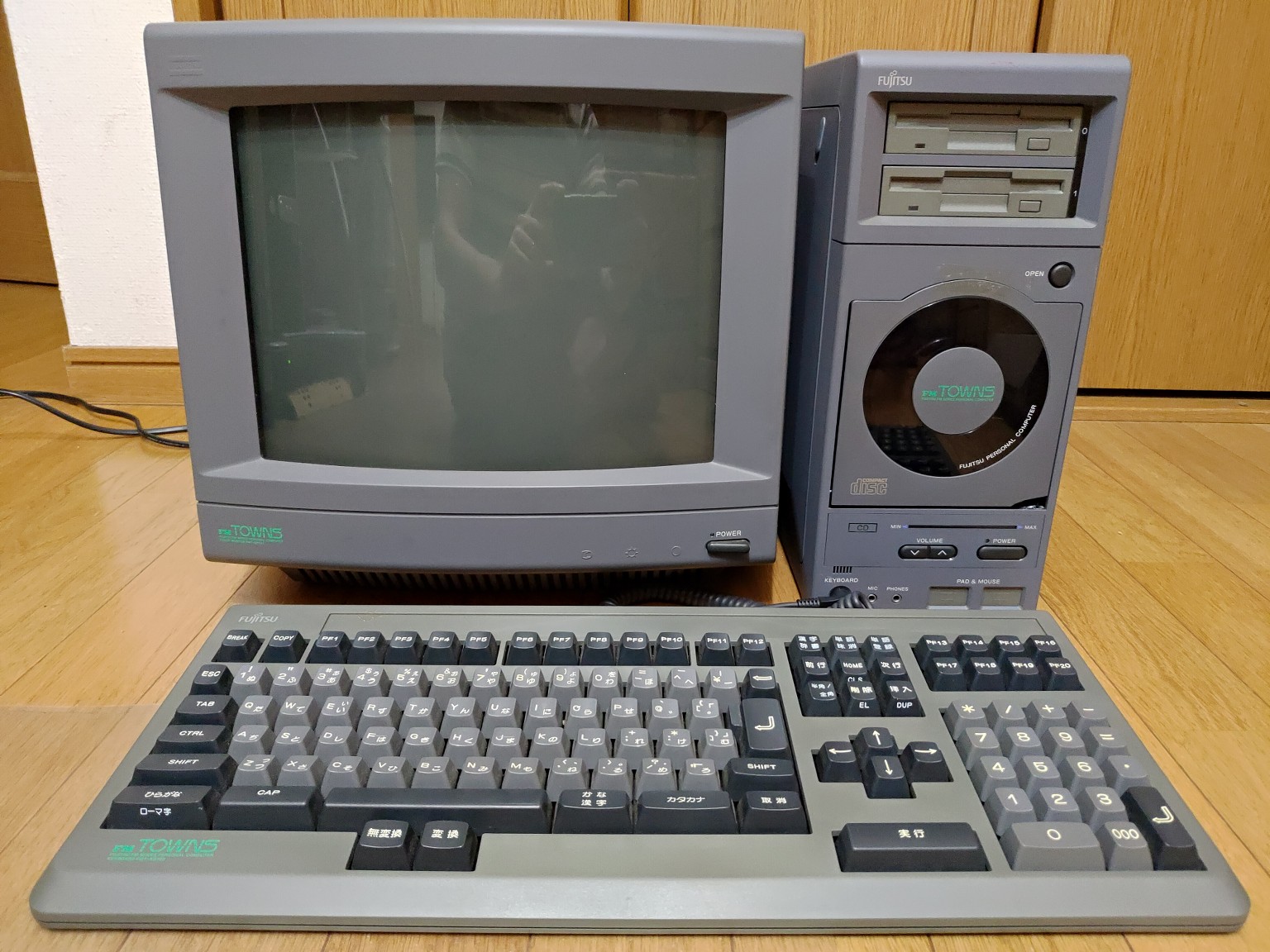 I’ve had my eyes on FM Towns ever since I started paying attention to the Japanese vintage computing market. It had always been in the back of my mind to get one, but they can be pretty expensive and it was something I decided I would just put off until later. I was certainly not expecting to buy one right now, because my room is hitting a tipping point in storage, and I’d just picked up a second X1 a few days before.

But it was an opportunity I couldn’t pass up. I saw this full system on Yahoo Auctions and it would appear in my recommended items list from time to time.

I expected it to end expensively, but as time went on, there continued to be no bidders. I checked at the last four hours, the last hour, and even the last five minutes, but there were no bids. So I bid on it and watched the clock down to the end of the auction. No competition! I got it for the paltry sum of 10,000 yen plus about 2000 yen shipping.

It was untested, but even if nothing else worked, the keyboard often goes for that price, and non-functioning keyboards are pretty rare, so I thought it was a good gamble. But when I got it home and started plugging things in and testing it, it all just worked. Amazing!

At least, to the minimal extent I could test it. I couldn’t figure out how to get to the BIOS, and I didn’t have any bootable media, so I could only really test the monitor and that the system could pass the memory check. But it was a promising start!

One potential reason for the low price was that the auction only had one photo attached, which showed the small amount of damage visible to the corner of the CD ROM drive, but what wasn’t apparent was that the rest of the machine was so clean.

The next day, on my lunch break, I went to BEEP in Akihabara and bought a game called Mega Spectre for 980 yen. Bonus, I found a mouse there, too! But compared to the rest of the system, the mouse now seems expensive.

It was just to test the system, but it’s a kind of weird game with unusual imagery, so I was kind of intrigued. It’s fairly straightforward to play, you drive a vehicle and capture flags, shooting other vehicles you encounter. The best news, though, was that I could confirm that the system works! The only thing I haven’t been able to test yet is the floppy drive.

My model is FM Towns 2F. At its core is a 386-16MHz with 2MB of main memory and 640KB of video memory. It has a CD-ROM drive and two floppy drives, and while there is no hard drive, one can be added by the external SCSI connector on the rear panel.