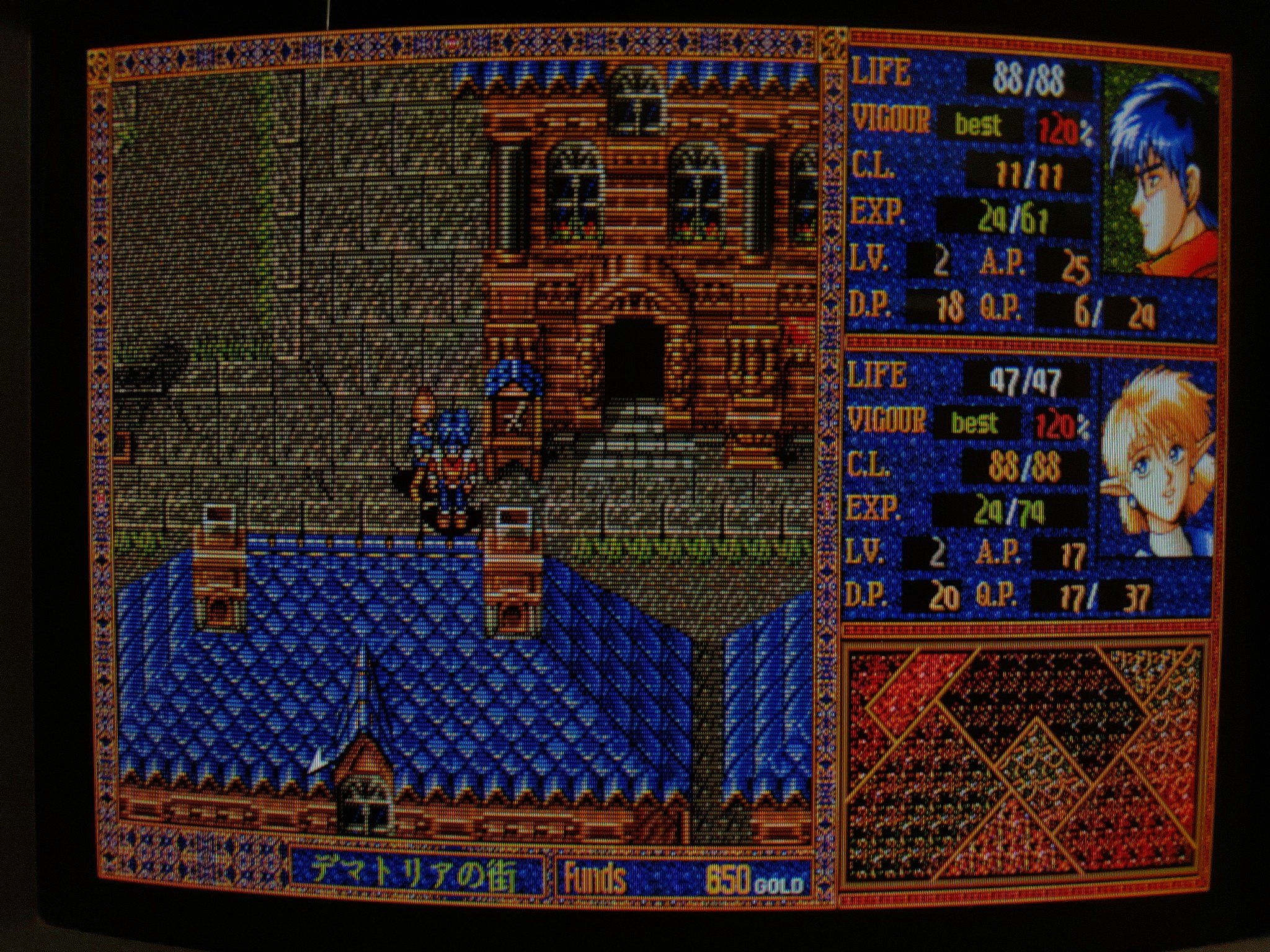 I’ve always been a fan of computer RPGs. When I started getting into Japanese vintage computers, I would make a point of getting an RPG or two for every major system. Problem is, RPGs consume a lot of time, if they’re any good. So I end up just adding to a queue of RPGs that I have tested once to ensure they work, then never get around to finishing (or sometimes even starting)

One major exception sticks out, and that’s Amaranth III for FM Towns. Owing to its vibrant graphics and its varied soundtrack, it was a quick hook. The combat system is somewhat innovative and there are many still frames of beautiful artwork. I’m moving slowly because there are many new words in the game that I usually take the time to look up, but I’ve made substantial progress.

You start out assuming the roles of two deities -Rian and Deen – laying low in the inn of a small town. Deen seems to thrive on attention from the local mortals, so she has set up a dream-reading booth in the city, where she proves to be quite popular.

They catch news of a nearby fair where nemuri-byo, a state of sleep from which one doesn’t wake, is claiming victim after victim. Deen thinks she has the power to stop it by entering the dream and freeing the dreamer. They buy tickets at the train station to go to the fair, but she had raised the ire of a powerful enemy that comes in by hijacked train to attack her.

Deen and Rian defeat the enemy’s foot soldiers and escape with their lives but have to find a way to sneak out of the town now because the more powerful enemies have commandeered the train station. They decide to sneak out as stowaways on a trade ship.

On the ship, they are eventually discovered to the annoyance of the ship’s captain, but they prove themselves useful by helping the crew to defeat a band of attacking pirates. The pirate ship captain presents himself as the first boss, but it’s not quite in the realm of the main story line, sort of a tutorial boss, I feel.

After defeating the captain, you discover two hostages, a woman and a girl. We learn that the girl has nemuri-byo, but the woman is her protector and forbids Deen from trying to enter the girl’s dream to help. So as soon as the woman goes to sleep, that’s exactly what Deen does. Deen and Rian enter the dream as in-dream characters and their first real adventure begins!

One fun thing about this game so far is the animation of the spell effects. Healing spells are pretty simple, but check out the fire and ice spell animations.