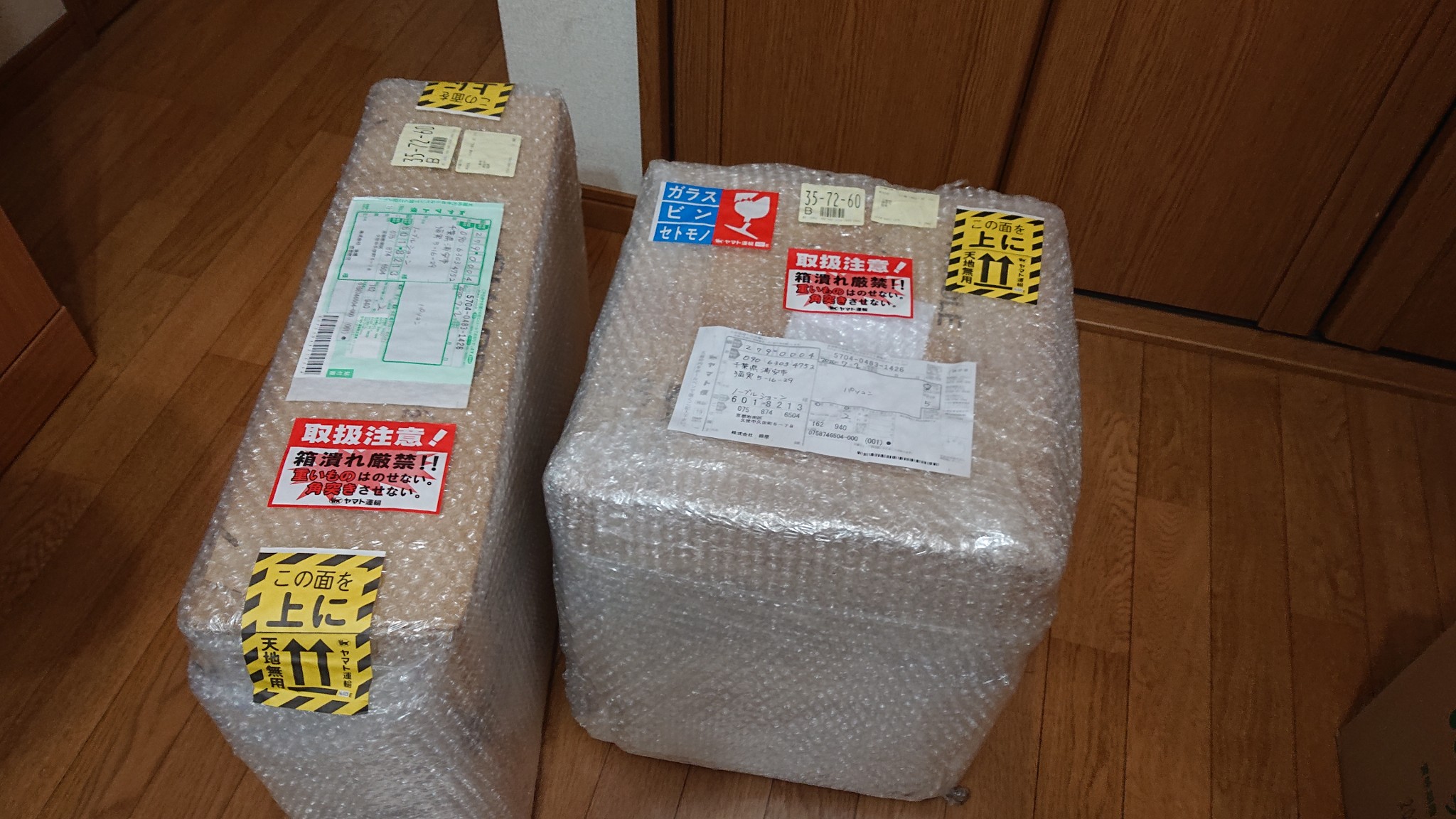 In addition to the X1 and the MZ series of computers, Sharp had another line of 8-bit computers. This would have been released around the time of the NEC PC-8001, and could probably be considered its peer, but did not achieve a fraction of the notoriety that the PC-8001 did. Information on this system appears scant.

Kudos to the Japanese couriers for the way they treat packages. One of the stickers on each box reads “do not crush box; putting heavy items on this box is forbidden.” Indeed, they arrived in good shape, for being approximately 40-year-old cardboard boxes. I opened up the boxes and laid out the components.

The machine and matching monitor are in amazing condition! This is all pre-cleaning but the worst thing I can see was done intentionally – the tape to hold the function-keys guide in place. But now the big test… does it work? If either one of these pieces doesn’t work, I’m up a creek, at least for a while, because I would need to bug someone to make me a custom cable for either the monitor or the system to be able to test them separately.

But luckily, they fired right up! I breathe a sigh of relief every time I see these ancient beasts still beat their electronic hearts. Okay, I see we are dumped into BASIC, as is customary for most of these computers, although now that I think about it, both the MZ and X1 series don’t, so I was pretty pleased that the PC series does, as I wouldn’t be able to do much without it. BASIC, though, I can do something with. Or can I? The most basic of BASIC commands, PRINT, is recognized but doesn’t do what one would expect it to.

First, when you make an error, the PC-3100S *really* wants you to stop and think about what you’ve done. It beeps three times, displays your error at the bottom, and doesn’t give you your cursor back! Never seen anything like it. As far as I can tell, you have two options for proceeding, up-arrow to get your line back and fix it, or CL to erase the line and start over. DISP seems to work the same as PRINT in standard BASIC. Perhaps in this BASIC, PRINT is for interacting with a printer? This is far from the only difference in BASIC. From the one and only source of informationI could find about this system, which also isn’t terribly detailed, this BASIC is similar to Sharp’s pocket computer BASIC. So that might be a source of information, too.

Let’s take a closer look at the aesthetics and connections of this machine. First is the main system itself. It has a decidedly unique keyboard. The first thing I noticed quickly was that there is no shift key. You instead go from mode to mode using the dedicated keys. You start in alphanumeric mode, and you can switch to katakana mode or punctuation mode. And although it’s not a mode per se, you can also enter another set of characters and graphic symbols by holding down control. Parts of this system resemble the MZ-700, although the MZ-700 does also have a shift key. The directional arrow keys surrounding the home key is also unusual. But really, aside from having a QWERTY layout, they made this different in almost every way.

And the monitor. You can adjust the viewing angle and the height by pivoting or sliding it along the rails on the side. That’s pretty cool! It’s also much lighter than most, I guess because it’s monochrome and doesn’t need all of the extra electronics to process and generate color. And another first for me, there’s no plug for the video source of any sort, you screw in three wires for video, sync, and ground. I’m not sure if mixing these would produce disastrous results or not, but I’m certainly glad they left the cable attached!

I do believe there is a problem with the system. It largely appears to work, but the way it stores code and displays it seems problematic. I’m trying to figure out the pattern and will post more soon, but I think there’s probably something wrong with a RAM chip. There are many other quirks, which may just be standard system behavior or may be glitches. This system is so unlike anything I’ve used before, I’m not able to clearly determine.