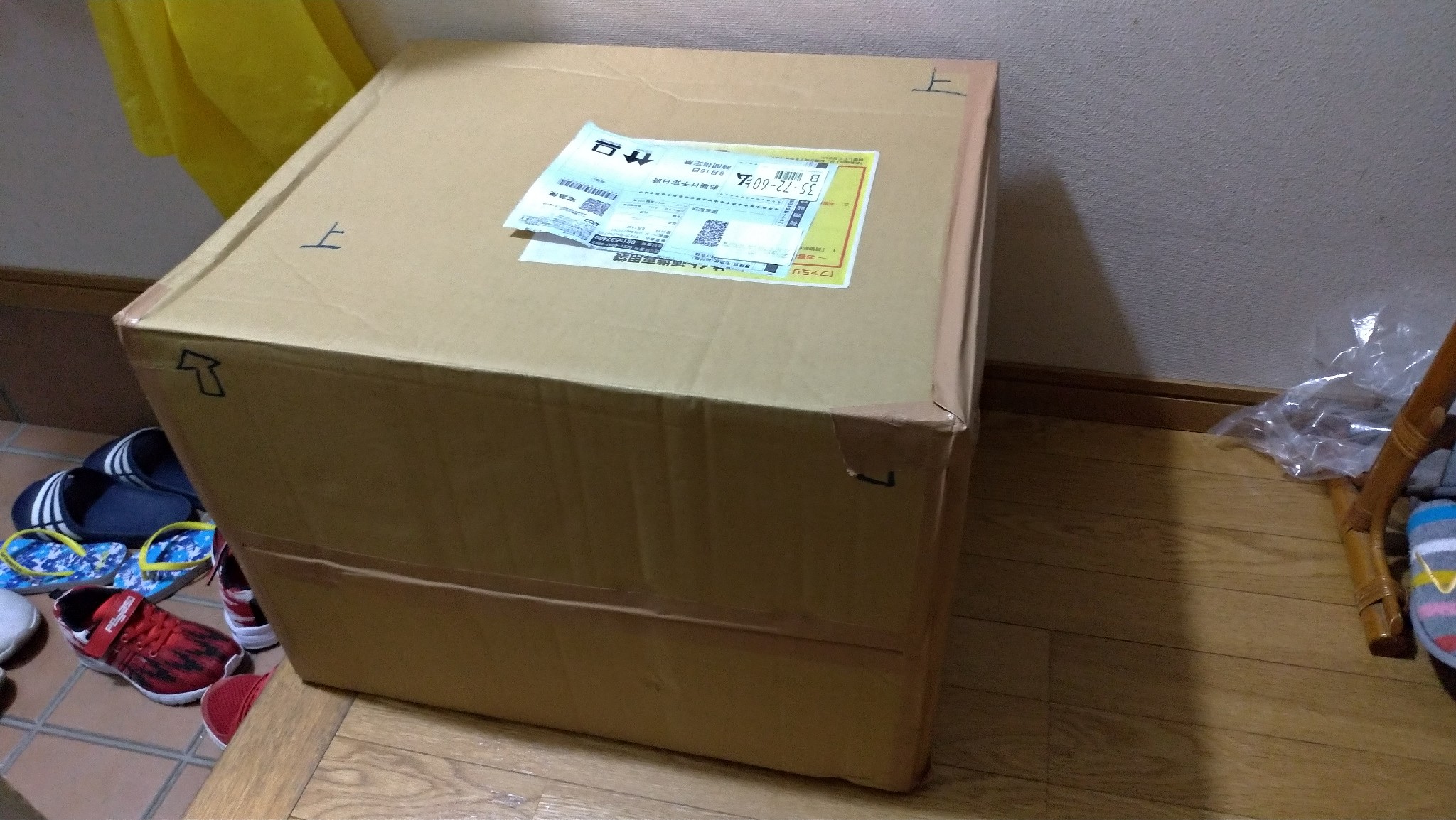 I’ve had my eye on one of these Sharp machines with the integrated monitor for as long as I’ve been perusing Yahoo Auctions. They come in a variety of models and they’re all really quite striking. They vary in price but they’re not necessarily that expensive, but I’ve always avoided buying them because they’re just so gargantuan. See:

So as you can see, my resolve was broken, I finally got one. I’m a sucker for a bargain and this was the cheapest I’ve ever seen one priced, and shipping was included. In addition to big, it’s also heavy, as expected; I estimate it’s a good 15kg.

The MZ-80K series comes in three colors – red, green, and brown – brown being my third choice by a long shot, but bargain hunters can’t always be choosers. Now that I have it here, though, I can see why some would choose brown. It’s a pretty handsome-looking machine.

The seller included a short laundry list of minor problems but so far none of them have actually happened on my watch. In fact, it seems to be working quite well, with the only noticeable problem being that the tape deck controls are kinda stiff. I sometimes have to press play, rewind, or fast forward a couple of times for it to trigger. No big deal. It came with three tapes: BASIC (essential!), Poker (playable! but with a terrible fortune telling app on the back), and Montage (where you try to remember the details of the face of a criminal and the answer the police-computer’s questions about it in an attempt to recreate the face, which is really boring, yet it seems someone actually sold this game).

The keyboard works, the tapes all work, but something isn’t quite right… oh! That’s right. The monitor is black and white but it’s supposed to be green. That must be why I can’t catch a break in the poker game. How do I enable green mode… aha! Here we are.

There we go. The Poker game requires the green overlay to be installed in order to function properly, I guess. Mine has a small crack but that doesn’t seem to matter.

The BASIC tape included a little note about turning on auto-repeat for several keys, most notably the space bar, cursor keys, and backspace key. Also clear/home, but I’m not clear on the benefit of that. The command must be typed every time you start BASIC, as it only changes the setting in memory. Set to 0 to turn auto-repeat on, set to 1 to turn it off (counter-intuitively).

The MZ-80 is a very close cousin the MZ-700, so in addition to the cassettes I received, I also have my existing MZ-700 library to test. Not everything works, not by a long shot, but it can load some games, both BASIC and machine language games. The best-working games so far are Pac-Man and Zombie Panic, which are unfortunately almost the same game.

Unfortunately, the controls are awkward. As I mentioned, the MZ-80 is a series, and in the series, K means “kit”, at least, 50% of the time (once). So the MZ-80K was sold as a DIY-kit for you to assemble. The MZ-80K2 was not sold as a kit, but rather a low-end version of the MZ-80B, and resembles the MZ-80K in a lot of ways, including the keyboard.

The keyboard is quaint and although I’ve seen a variety of states of the K-class keyboard, I’d say the plastic covers have done a nice job of preserving the keys on my keyboard. I like the aesthetic. *Using* it, on the other hand, is not superb. The keyboard really struggles if you type too fast, so you have to slow down. If you have two keys down at the same time, it almost certainly won’t pick up the second one (excepting the shift key, of course). And the layout is not at all standard, although it does follow QWERTY order.

The result is that the game keys are often laid out terribly. Pac-Man keys are all on the same row, with N・comma・forward-slash・first blue key controlling left, right, up, and down, respectively. I mean, you can probably get used to this, but it’s not very natural. And another quirk, if you don’t press S to start, the game will automatically start for you after the mini demo. This doesn’t happen on the MZ-700.

Zombie Panic seems a little more straightforward, because it uses the cursor keys. But wait! It’s the Commodore 64-style cursor keys! So going down or right use the cursor keys, but going up and left use shift plus cursor keys! Again, you can probably get used to this, and this game is in BASIC so it could probably be fixed fairly trivially, but it’s basically the same game as Pac-Man with much lower production value, so it’s probably not worthwhile.

HuCAL is probably the most compatible software from my MZ-700 library, but that’s probably because timing isn’t critical in a spreadsheet program like it is in a game.

Other games like Galaxian will load and attempt to play, and if you are familiar with the MZ-700 version, you will see that it looks pretty similar but with incorrect characters, and the incorrect characters somehow seem to amount to collision so you can’t move when the game starts, you just die immediately.

And still other games just won’t load. They’ll get to the end of the tape and still think they’re loading, or will have frozen. So despite their similarities, they’re clearly different enough to have spotty compatibility.