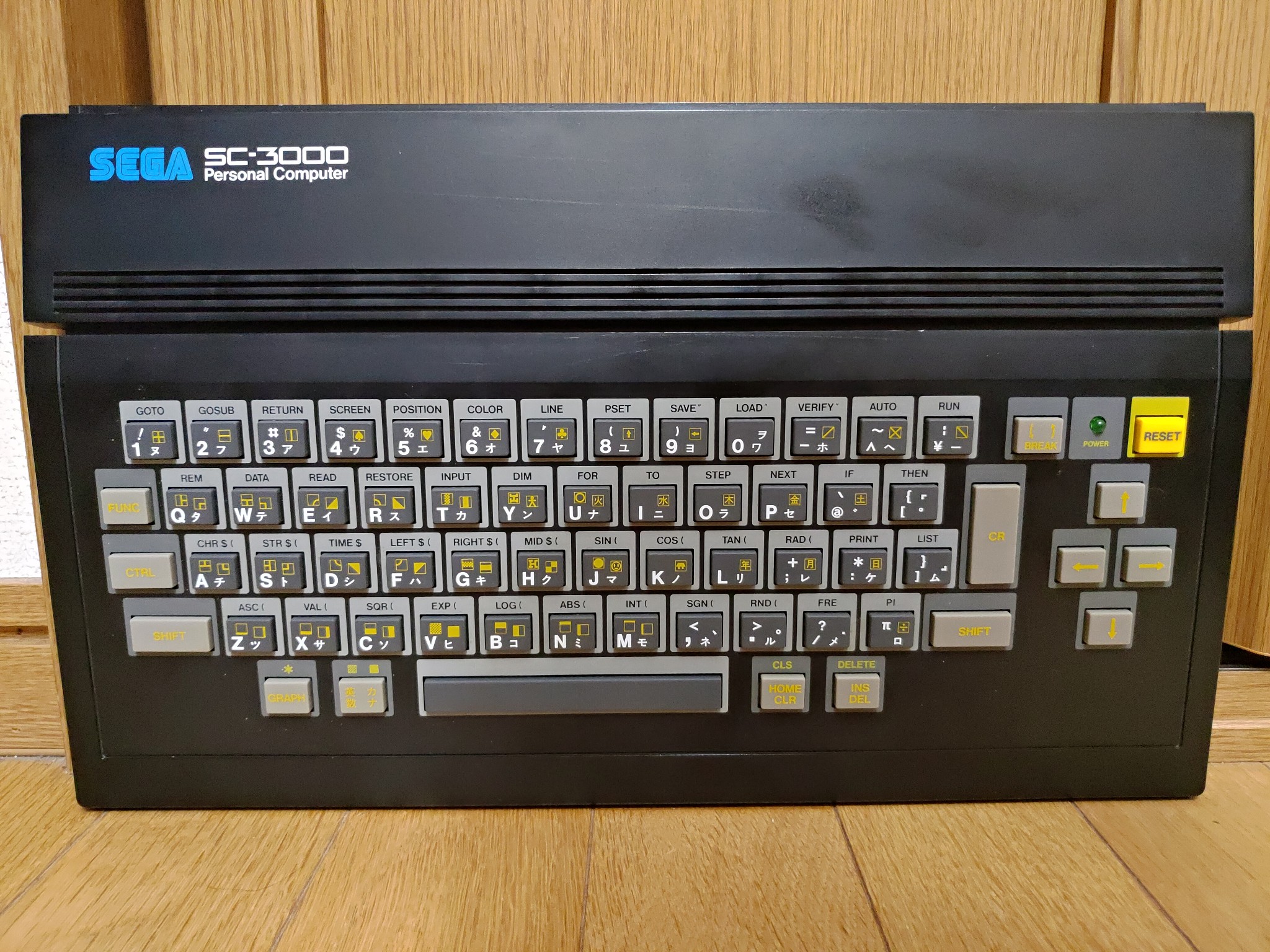 This machine has, for better or for worse, replaced my SG-1000 II with keyboard attachment SK-1100. I reasoned that the integrated keyboard would make it much more convenient to use the programming cartridges, and the composite video output capability of the SC-3000 (compared to RF only output of the SG-1000 II) would make it easier to use, both in terms of connecting and easier on the eyes while in operation.

I have actually bought two of these machines. The first one had a spotty keyboard, all keys would work but some, especially ins/del, needed to be pressed *really* hard to be input. The second one also had an imperfect keyboard, but it was much better than the first. I swapped out the keyboards so I could keep the more attractive case of the first SC-3000. Even still, I have to admit, the typing experience on the SK-1100 was much better (the owner of that machine took phenomenal care of his systems).

Taking the keyboards apart is fairly obnoxious, with their 15 screws and tiny posts for the rubber keys to attach to, and weird square tab indents to hold the top rear portion in place. After reassembling, they don’t quite feel the same; the functionality is fine but it seems a little creaky. I think the plastic top doesn’t sit as well as it used to. Maybe it’s just my own poor skill. In any event, my recommendation is to get one in great condition with working keyboard so you don’t have to mess with it!

I finally bought the composite video cable adapter after a few weeks of messing with it over RF. The double-headed design is clever, it seems it works in the SC-3000, SG-1000 Mark 3, Master System, and the MegaDrive/Genesis, including the last revision with its oddball connector. The composite video output is definitely simpler and doesn’t require tuning, but it oddly seems lower video output quality than the RF. It was a really cheap cable, so perhaps that’s the reason why.

Enough of the cheap shotting, though. It’s easy to pick on rubber chiclet keyboards and old video output, but this system’s got heart, too.

Like its predecessor, it has no built-in BASIC ROM, so you have to plug in a cartridge for it to do anything. This more than anything gives it a console feeling despite appearances, similar to the Commodore MAX Machine. Many Sharp machines also didn’t include a language ROM, but they did include a monitor so you could interact with the machine without loading anything.

The selection of BASIC cartridges is surprisingly varied; I know of five for this system. They vary depending on number of available commands and cartridge-supplied memory. The one I have is the most advanced that I know of, using BASIC level III B and containing 32KB of RAM, which gives you plenty of room to write programs. And the system comes with audio in/out ports on the back for saving your programs to cassette.

And besides BASIC, of course, there are a lot of games. Some of these are probably familiar to many, it includes a solid version of Congo Bongo, and this port of Lode Runner runs really smoothly. The third may be a Japan-only game, at least I’d never heard of it before, called Hustle Chumy. I’m not yet clear what you’re supposed to do in the game. I get to the top of the stage and nothing really happens, so I probably need to somehow manipulate the ladder covers earlier in the level.

The SC-3000 is completely compatible with the cartridges made for the SG-1000 II, and I’ve actually picked up quite a few games along the way. There are probably a good four or five in here that I’ve yet to even test.

The one other shortcoming of this system compared to the SG-1000 II is that it doesn’t come with the convenient side hooks on the system to hold the gamepads in place. In fact, while it has two joystick ports, it doesn’t even seem to have dedicated game controllers of any sort. And the joystick ports have moved from the back (which is okay, that’s not such a great solution for controllers with such short cables, anyway), opting instead for the Commodore-style joystick port placement, where both are on the same side. The games all work with the keyboard, so I guess that’s what you were expected to use. For the time being, I’ve kept my SG-1000 II controllers.