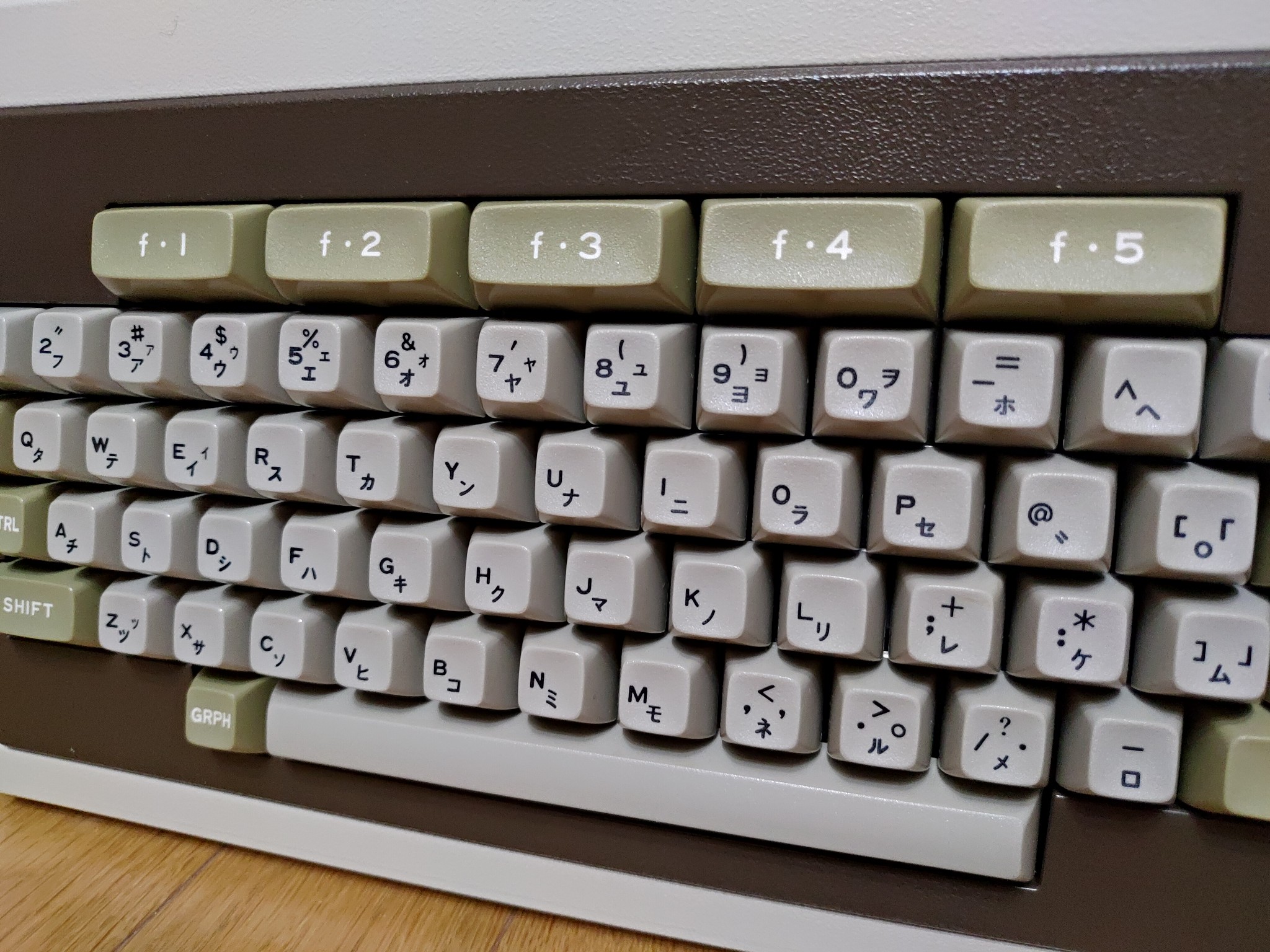 A legend in the history of Japanese computing. This machine is built like a tank with its metal exterior giving it quite a bit of weight. It doesn’t try to be fancy but its simple and clean aesthetic is charming.

This is the oldest machine in my collection, first available to consumers in May 1979, when I was still three years old. Much like me, it still works. It boots up to the BASIC screen and the keyboard functions smoothly, allowing me to type in my simple BASIC program.

It’s capable of high-res graphics and 40- or 80-column text display with 8 colors over digital RGB, pretty typical of those that followed it until the mid-80s. There was also a third-party PCG (programmable character generator), an add-on device that I don’t possess that allows for a character replacement approach to graphics. The PCG was integrated into the later PC-8001mkIISR, but both the add-on and the PC-8001mkIISR tend to be quite expensive.

Many of the games are character based, whether you had the PCG or not. First is Asteroid Belt, a space shooter that maybe comes closest to Space Invaders, but is much more difficult because the projectiles are more numerous and come at you at a 45 degree angle, and after the first stage the invaders jump up and down, making them unpredictable:

Another game I’ve got a fondness for is called Wild Swat. You play as a police car that is chasing and trying to shoot a motorcyclist while avoiding traffic. Avoiding the traffic seemed like a tremendously difficult task at first, but the game actually gives you quite a bit of leniency as long as you don’t hit them with the front of your car. This might be an early example of having a “hit box”. The challenging aspect is hitting the motorcyclist, you have to be very precise. But the actual problem with the game is that the course is very short. I wish navigating the traffic were a little easier but the traffic pattern random. As it is, the pattern repeats after about 20 seconds so you get a good sense of where you should be after playing for a bit.

The game is nonsensically colored, where everything in the same section of the screen is the same colors, so cars change color as you pass them. I suppose they were just messing around with color and they figured this was good enough. When you hit another car, the very simple sound generator creates a loud noise and the screen presents a garbled set of colors and characters I suppose to simulate the crash. It’s kind of an interesting visual effect. When you quit the game you are treated to a goofy animation and dumped back into BASIC.

Compare those games to the demo tape, which makes use of the high-res graphics that the machine is capable of. Looks very nice but it is definitely a chore for the computer to display some of these. Long draw times, especially on the 3D images, which are calculated, not pre-rendered.