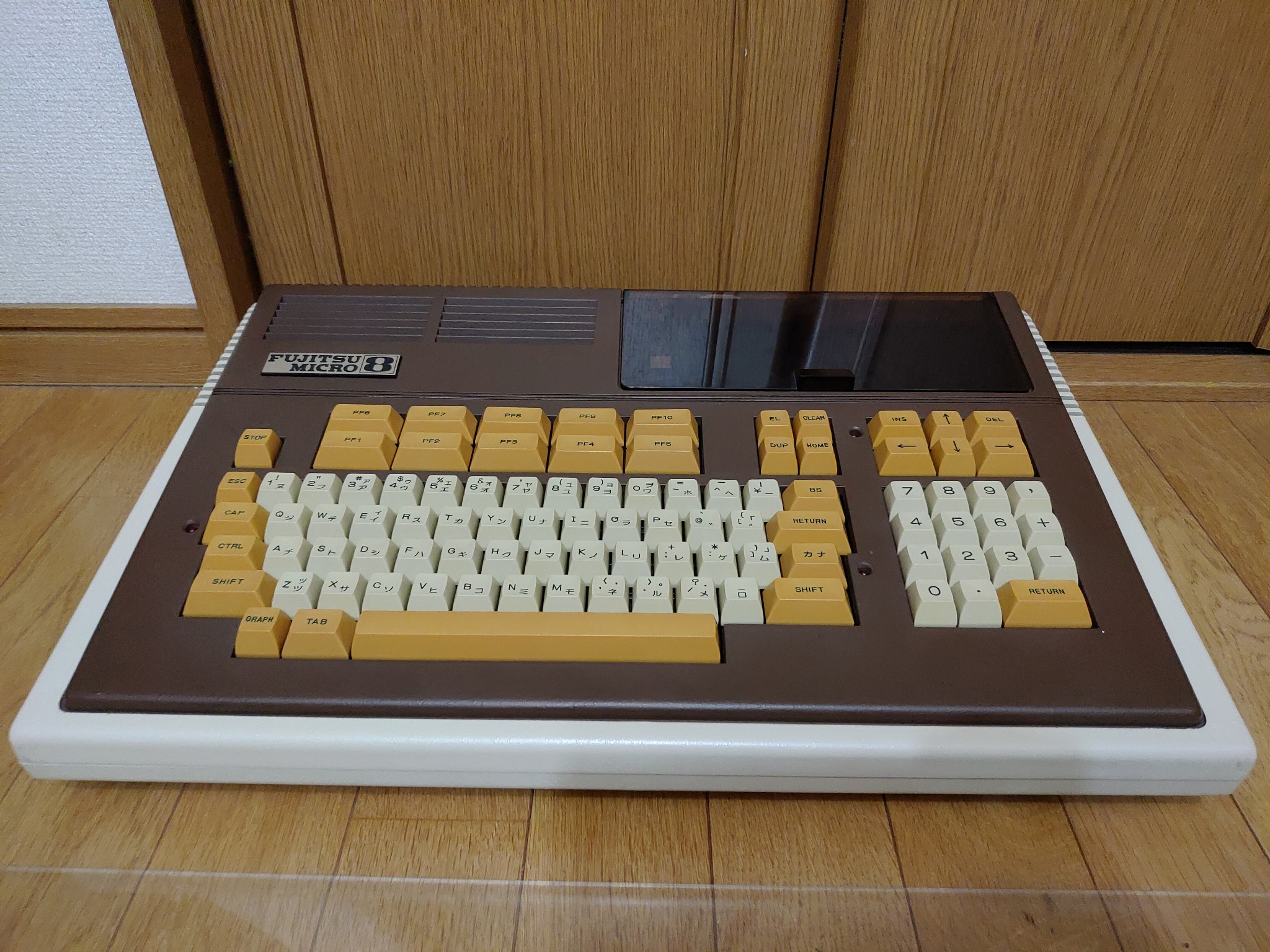 This machine is a big beast that has always been hard to ignore. It pops up quite often on Yahoo Auctions and it stands out. It’s got a really unique aesthetic, with its bumpy-textured brown body and yellowish-orangish and white keys. When I first saw it, I thought it was terribly yellowed, but it was at least mostly by design. I grew to like it over time, and I finally got one on a super bargain-priced auction.

I bought it in a fixed-price auction coupled with an NEC PC-8001. It was a bit strange, an auction that appeared in a far-fetched category around 2 o’clock in the morning. The seller’s description mentioned “not needing a lot of money for them,” and saying he just wanted to practice selling on Yahoo Auctions. I was all too glad to help him fulfill his wish.

They were untested, but they both fired right up. Always a relief! It’s a fun keyboard to press keys on, which I am distinguishing a bit from typing on. The tactile response and resistance are nice, and there’s the slightest of clicks to them. And there are four LEDs, which is pretty good for a Japanese 80s keyboard.

It’s as beautiful on the inside as it is on the outside, too.

It’s kind of slim-pickins for games. My friend had given me that archive of software, and it included FM-7 games, and some games for FM-7 were designed to work on FM-8 originally/as well. But determining which games are FM-8 compatible is a tedious task. I’ve found Black Jack and Lunar Lander so far.

Black Jack starts out with a long-winded drawing of each card, with a long pause between Queen and King to really ratchet up the tension, I guess. I won this hand skillfully and pocketed five 8-bit dollars, then quit while I was ahead. Before rebooting, I confirmed my suspicions that “How do you bet?” is not expecting an adverb.

And Lunar Lander, if that is your real name. I am bad captain, I agree fully. I neglected my duties so I could take photos for social media.

So I got it at a bargain, but if you think I let it go at that, you don’t know me very well. I’ve bought (and later resold) three or four more since then. One because it came with manuals and demo tape, one because it looked a little nicer than mine (but I didn’t like the keyboard as much, so I swapped them). And most interestingly, one came with bubble memory.

Bubble memory fits into the little tray under the top-right cover. The technology is completely different, but it’s sort of like a clunky 80s version of an SD card. It’s easy to switch out and take to another computer, provided that other computer has a bubble memory drive, which is highly unlikely!

The bubble memory appeared not to work at first, and troubleshooting was a nightmare. Seemingly someone had performed a mod with wires going into and coming out of practically everywhere. After a lot of red herrings, I came to the realization that my bubble memory did indeed work, but it required around 20 minutes to initialize.

I eventually decided to sell the system that the bubble memory came with, including the bubble memory itself. Now I have the standard FM-8 which was the nicest of the four or so that I’ve come across, and a nice set of manuals and matching demo tape.

One of the systems came with an unexpected treat – a full set of kanji ROMs. I took those out of the original system and put them into my own. Among the manuals is an appendix listing the in-ROM address of each kanji, so the symbols can be called from BASIC. I haven’t gotten very far yet, but I am trying to make a program that displays all of the kanji beginning with a selected syllable (which is how they are organized).

Right now it’s just hard-coded to display everything beginning with ヒ(hi). I’ll have to put everything into an array and make an interface for selecting the syllable.