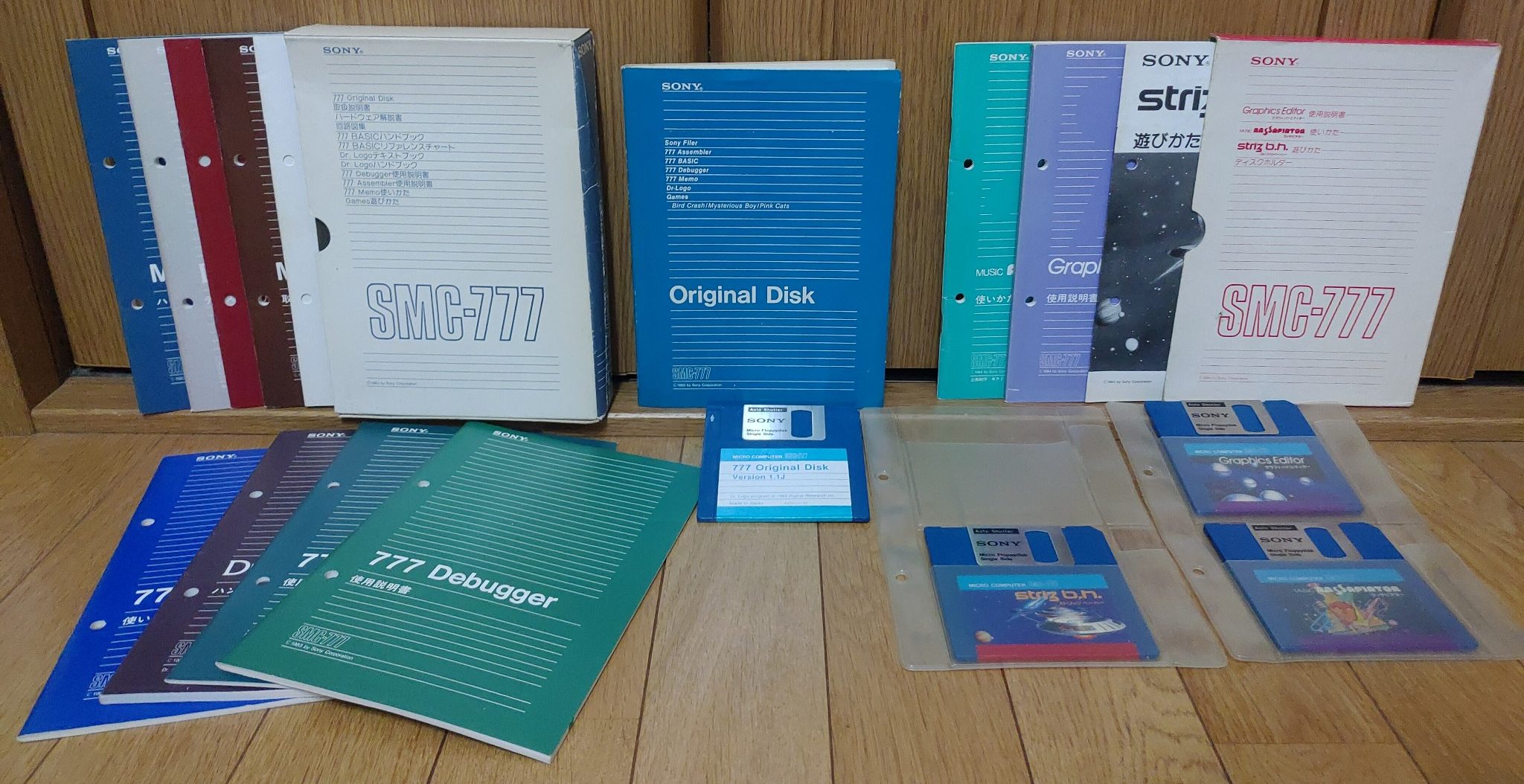 This must be my fourth or fifth SMC-777C by now. I don’t keep duplicates at the moment, so I sell the machines back, but I often pick up accessories this way to expand my collection. This lot was a particularly good one; I got some games, an official SMC-777 mouse, and a kanji ROM card! It also came with a complete set of manuals and software, some of them in better condition than my own, so I did a bit of swapping out to improve my own collection.

The games were quite a fortuitous find; I had only had a half-dozen or so games until now, but through this auction lot I picked up about 20 more. Some of them are a bit mysterious; a very nice implementation of Space Invaders but no mention of who made it; Ghost City, which is a Pac-Man clone, but for the most part they are Hudson Soft games which tend to be really solid. Being half the resolution of most versions of the games, and loading from floppy disk, makes them feel really fast. Games load in a couple of seconds, and with half as many pixels to push around the response is really fast (of course, being half the resolution is also a disadvantage graphically, so there is a trade-off).

The disks were not in great condition and there were some duplicates, so I copied everything unique off onto fresh new floppies. A couple of disks had read errors, but they appear to be on parts of the disk not occupied by data, so it was quite a success. The disk with 11 games is not my own doing; it came with that many. Quite a slick solution, really!

The mouse is intended for use with Sony SMC Paint, but I didn’t see any manuals or disks for SMC Paint so I wasn’t sure at first if anything was included that actually supports the mouse. But then I found that the previous owner had put SMC Paint on the Graphics Editor disk. Not instead of the Graphics Editor, but in addition to it, so while it did change the structure and boot-up sequence of the original disk, it does make it pretty good in terms of usability.

And finally, the kanji ROM card. I half-expected that it would be included because there was a manual for it partially visible in the original auction. Sure enough, the card was tucked away inside the machine, so it was nice to be able to confirm that. I extracted it from that machine and put it into my own. It works fine. There are a variety of apps that will leverage the kanji ROM card, for example, this word processor. And… this other word processor. Now we’re having a good time!

Another thing I didn’t notice during my previous visits inside this system is that the back of the keyboard has each key printed on it so you know which solder points belong to which keys. Considerate of them! The other card, next to the kanji card, with all the wires going in and out of it, is the palette board that Sony included in the C model of the SMC-777 series.