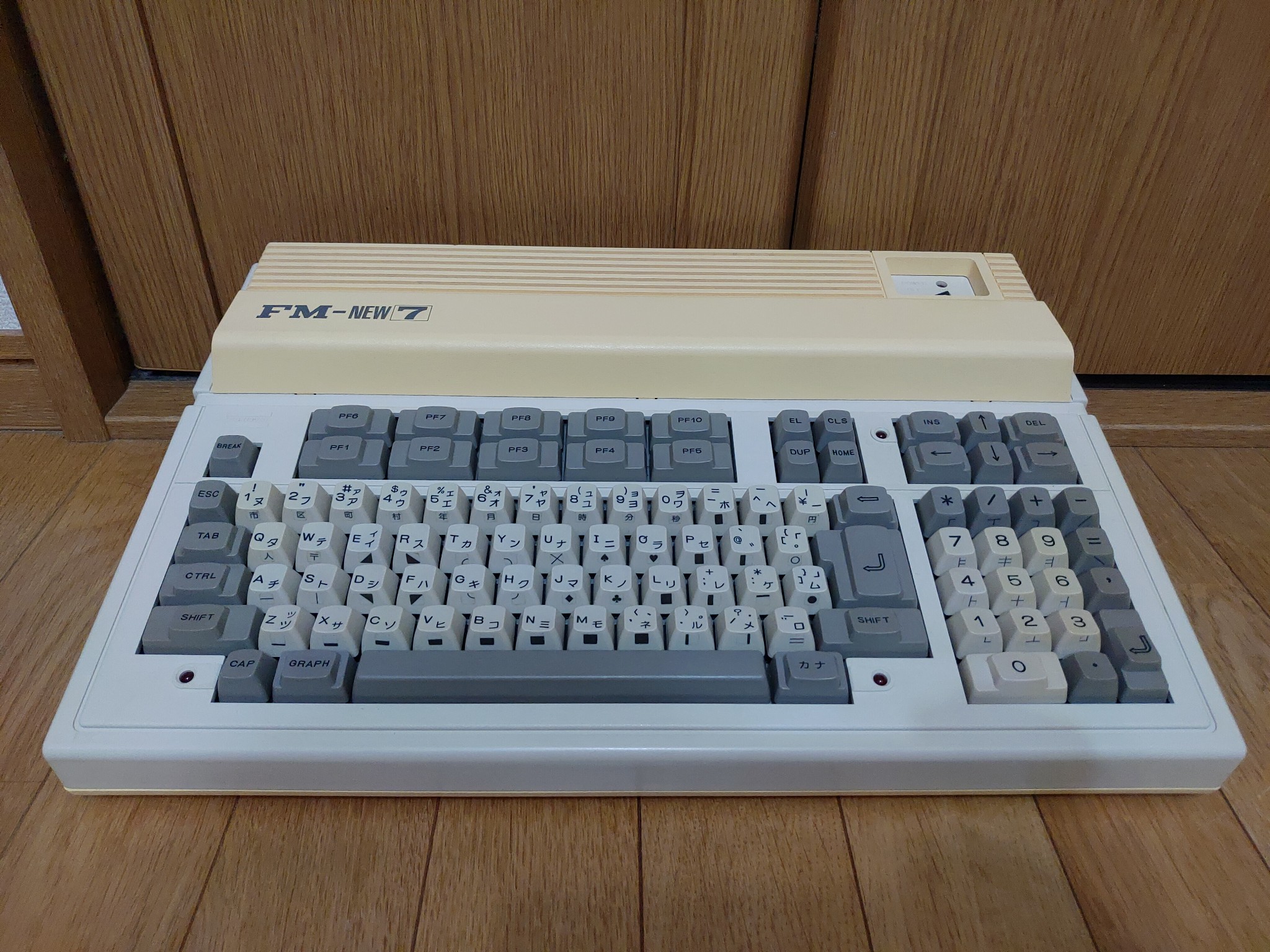 I bought and didn’t even write a blog post about the Fujitsu FM-7, and I’ve already traded it in for an FM-NEW7. Now, I wasn’t there thinking, “God, I’ve just GOT to get the latest and greatest version of this machine!” when I switched to the NEW7. In fact, they’re practically the same machine. It was a chance happening of a good deal on Mercari, an untested FM-NEW7, which was in better condition than my (then) current, somewhat-yellowed FM-7.

When I got it, it didn’t work. It powered on and came up to a blank screen with a flashing cursor that basically reacted to nothing, but I did notice that if I held “break” while powering on, it stayed in 80-column mode instead of its usual shift to 40-column mode, so I felt it was still being as responsive as it could; it was probably a simple problem.

Well, I’ve got this FM-7 that works, let’s see if I can transfer chips from the FM-7 to the FM-NEW7 and fix it. The machines shared only two socketed chips, but lo-and-behold, one of them fixed it! A kind donation of a working BASIC ROM from Curt later, and I had a working FM-NEW7 and a working FM-7 to sell.

Starting with the FM-7 and continuing all the way up to FM77AV, Fujitsu’s FM series provided the most amazingly convenient access to expansion cards. In the case of FM-7 and FM-NEW7, just take off the raised lid and plop them in. Pretty neat! I’ve got no expansion cards, however.

And I kept the cover from my old FM-7. So at first it looks like just an FM-7, so if a thief sees it they’ll think, “I don’t want this old crap.” but secretly it’s the FM-NEW7!

The quality of the cover is very good but I’m not sure what was intended by the length of the hang. They seemed to clearly want to provide access to the power plug so you don’t have to unplug that. That makes sense, and directly below the power plug are the reset button and the cassette DIN jack, so you don’t have to unplug the cassette either, good thinking. But then the CRT DIN jacks are both mostly covered. Do they not want me to leave those plugged in? I mean, the cover will go on even with them plugged in, but it’s as if they wanted to cover them. Anyway, I leave the cover off when I’m using it (of course), and when I’m not using it, I unplug everything and put it in my storage cabinet, anyway, so no big deal.

If you’ll notice, there is no joystick port. And keyboard-as-a-joystick implementation on these machines is a bit odd. The keyboard doesn’t have a means to detect when a key is released, it only sees that a key is being pressed. So when you play a game and you want to stop moving in a certain direction, you have to press another key. That key can be another direction, or a neutral key designated as a way to stop. This almost always pans out as using the number pad as a joystick, with four or eight direction movement keys surrounding the 5 key, with 5 being used to stop. This is very abnormal control compared to other systems, and not so easy to get used to.

Besides that, though, the FM-(NEW)7 is a stellar gaming machine. With its high-res graphics mode and crisp digital RGB output, the games look beautiful, certainly on par with the Sharp X1. Here are a few examples:

Mario Bros. Special, which is available on many Japanese 8-bit platforms:

Lydia, a graphical adventure with some action scenes (I didn’t play long, I’m not sure exactly of the flow of the game). Very notable for coming on four tapes and having 3D glasses, not that I can see 3D:

BlackHoll 2 (I assume this is supposed to say BlackHole 2) a pair of space shooter games:

And last but not lea… wait, least. Definitely least. Shogi. It gets an honorable mention because of the stellar box art, which was probably 98% of the budget: