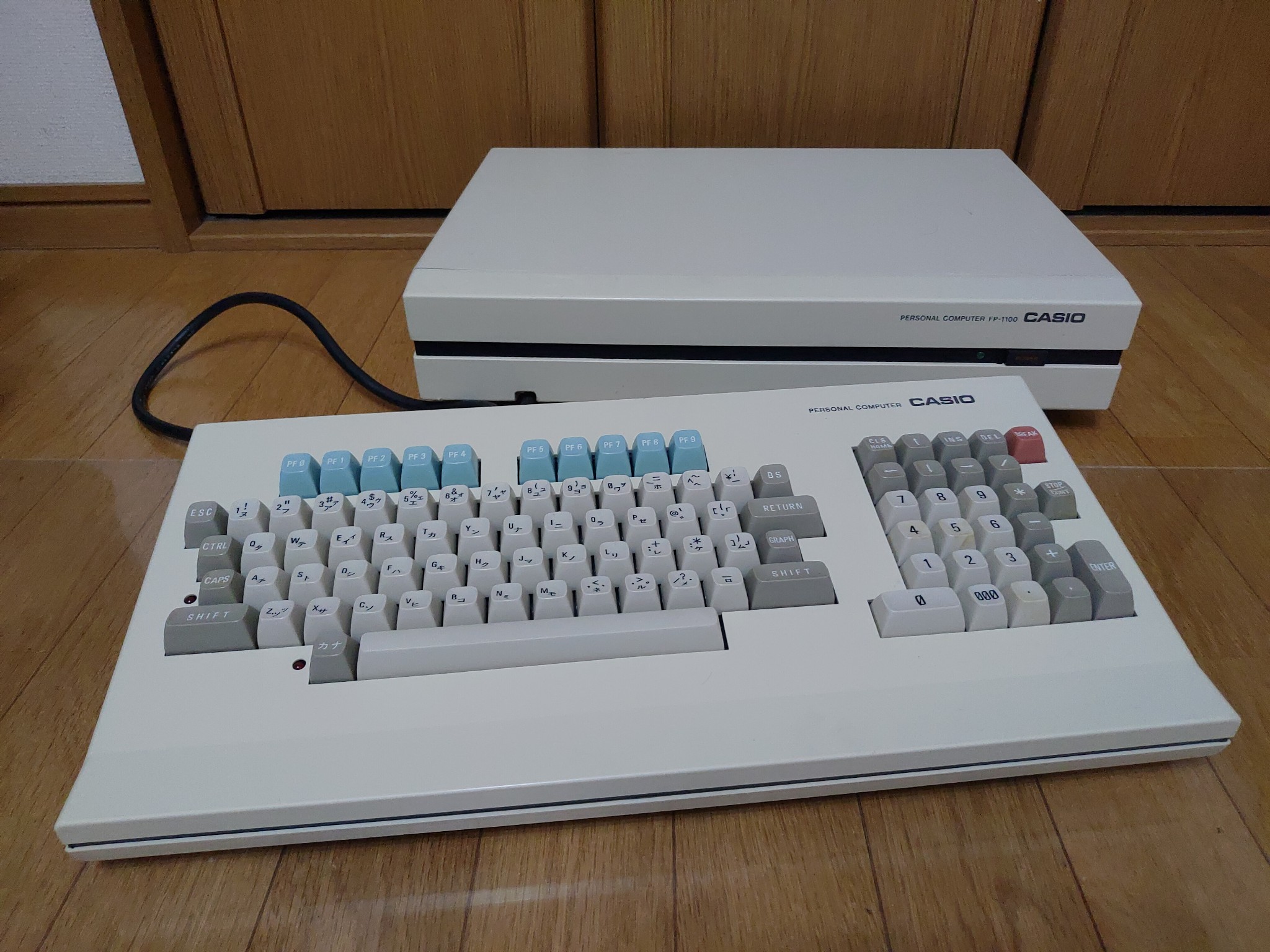 Now here’s a strange beast. With an unwieldly large keyboard and a really unexpected function of BASIC, this is certainly a unique machine. A friend of mine mentioned looking for games for it but they were terribly expensive, so you know that always catches my ear. Oddly, despite being a fairly rare machine, I found two auctions for them ending two days in a row. The first one was boxed with manuals and looked amazing, but it went for about 60000 yen.

So I got this one, no manuals, no box (definitely don’t need the box but really wanted the manuals!) for a much more agreeable price. It is in pretty good shape, too, with the occasional scratch or scuff here and there. It’s a truly unique approach to a computer for that era. Look at the keyboard, for instance. The most striking part is, of course, the baby-blue PF keys, but check out that numpad with its tail and appendages. Evolution at work?

But there was a decision made by Casio that was nothing short of baffling… the keyboard is not built in to the unit, but it’s not detachable, either! Not by conventional means, anyway. For all eternity, or at least as long as it’s in my possession, this keyboard will never be further away from its unit than it is in the following picture.

And, hmm. Maybe not *as* strange, but all that real estate on the front of the main unit and only a single button for turning the machine off and on. Front-side reset really would have been nice! But of course, all of these weird decisions translate to “having character” four decades after production, so I’m not really complaining!

The machine fires up normally and the keyboard functions well. As I mentioned, the BASIC has an unexpected feature. It is able to load up to 10 BASIC programs simultaneously. As I mentioned, I don’t have the manual so I don’t know exactly what the deal is, but it seems to set up 10 processes and allows a BASIC program to be attached to each. I don’t know in greater detail, but maybe there is a command to launch another program on another process? I can’t imagine there is true multitasking but for example you could load a clock and calendar in the corner and input data into a separate program running elsewhere on the screen? It sounds neat but also I can’t exactly come up with a use case where it becomes definitively better than having a single, larger program. In any event, here’s my little demonstration of it.

So how ’bout them games! How about them? I told you they were rare and ridiculously expensive, so why do you think I have any? But I happened to find a kind of strange batch of them on Yahoo Auctions the day after I bought them. There was no exception to the “ridiculously expensive” rule, but this was a lot of 17 games and every game had a double, with one game having a triple. What’s weirder, except one of the 17, they all appeared to be unopened. So I expect to get a large chunk of my money back by selling the extras (as a side note, the one that was opened was totally violated, being recorded over by an MSX game and written in Sharpie over the FP-1100 game’s loading instructions! Which is sort of okay because the instructions were wrong to begin with!).

In fact, I may only end up keeping the two Hudson Soft games. Most of the other games are really simple. Not to say they’re not fun, they kind of catch my interest, too, but they’re definitely a budget company and have a minimalist approach most of the time. That would help secure most of my money back. Oh, just to clarify, I opened up one set of games. I opened from the reverse side of the case so the seals are still in tact, recorded them, scanned their covers and loading instructions, and put them back in their cases.

Here are the games in action, first the budget games, starting with MOO GAME. A little tough but with some strategy and patience, definitely possible to win sometimes:

Next is Kalah Game. Never heard of it before but somehow managed to win:

Backgammon. I always forget how to play and think I’m doing well, but don’t remember in time that you don’t actually need to get to the final space:

Okay, this Block Kuzushi is a bit more exciting but VERY difficult because your paddle is miniscule!

Alien no Gyakuryu is a bit more balanced, decent action and the way in which it is challenging isn’t as frustrating as Block Kuzushi. Definitely a playable game!