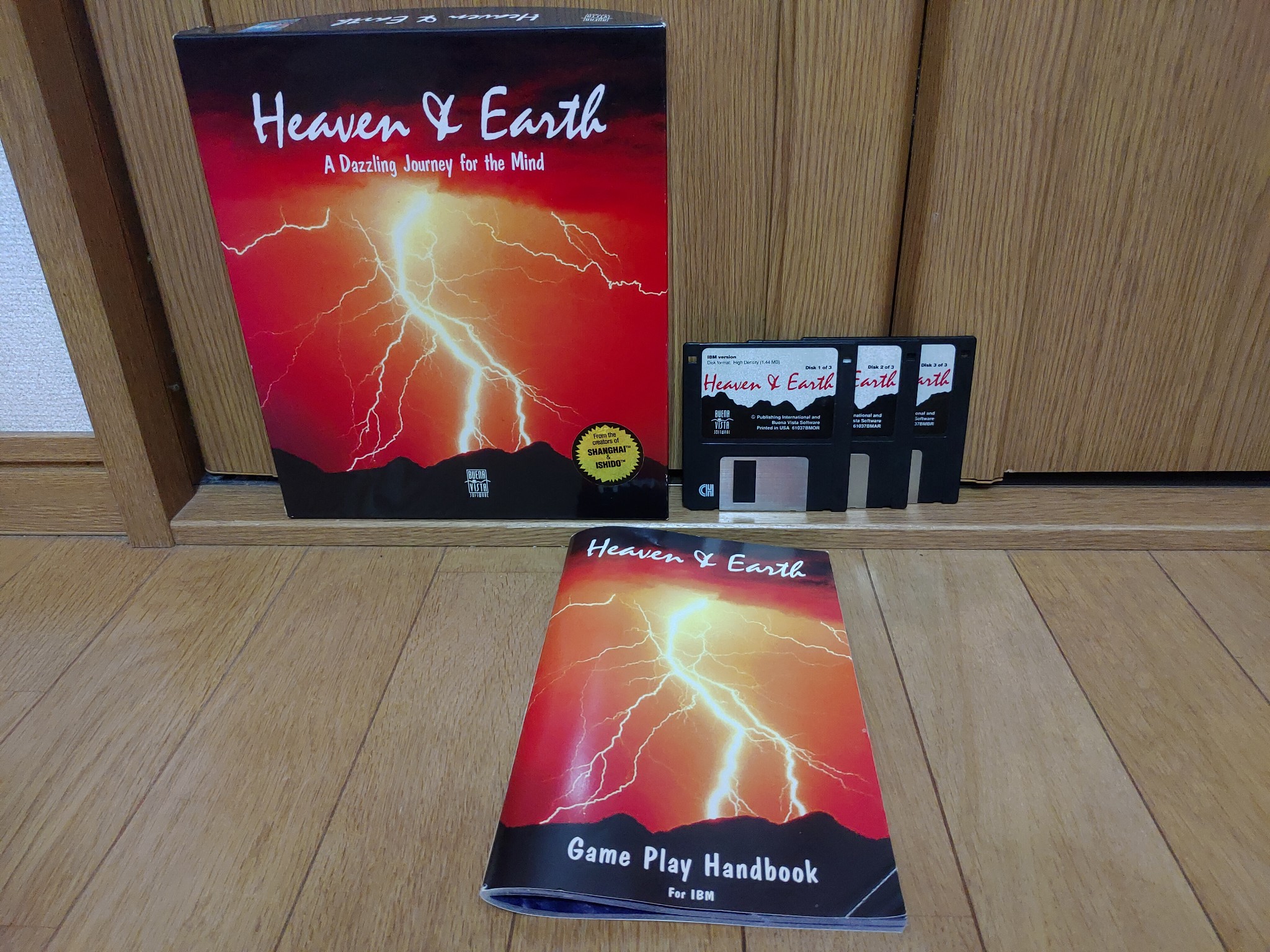 I bought this game back in the mid-90s because the screenshots looked interesting, and because it came with a high-quality Mickey Mouse mouse pad (it was released by Buena Vista Software, owned by Disney, so I am sure they got a nice discount on the licensing deal). One thing that stuck with me from this game through all these years was the very unique card game. But there is a lot more to this interesting collection of “stuff to do”.

This version didn’t come with a mouse pad, and I am sure even if it did, unless it was unused and in a protective bag, it would probably be nasty, so just as well. However, and I didn’t notice it back in the day, the semi-glossy, 80-page manual is pretty darn impressive.

You are going to get a sort of oddball view of this game, because it’s coming through the lens of my Toshiba J3100 with its plasma EGA screen. Text isn’t quite as clear as it would be on a 256-color display, puzzles that rely on color become quite a bit more challenging, and some things simple don’t display. For example, if you look at this “gateway” picture, where you choose what aspect of the game you will play, the three rocks in the foreground are supposed to be runes with pictures depicting what the activity is, but it simply doesn’t show up on this screen. That’s okay for me, though, I enjoy seeing this beautiful screen display things as best it can, perfection not necessary.

The first rune is for the pendulum activity. You use your mouse to control the direction of the wind, to cause the pendulum to come to a temporary stop over a series of jewels before it swings back the opposite direction. I remember this being a very relaxing activity back in the day, but doing it via keyboard wasn’t very easy! I wonder how difficult it will be to track down a serial mouse. In the photos below, you can see I completed level one, marked by the disappearance of the jewel in the 11:00 position.

Next is the card game rune. Perhaps you remember I said I was interested in the Japanese card (video) game Hanafuda, because it reminds me of a game I used to play? This is that game. And something I didn’t realize before, but it says in the manual that this game is indeed based on concepts from Hanafuda, so my mental connection between the two appears to be well-grounded.

The game begins with a blank field and a stack of 48 cards. Four cards are turned over at a time, and you pick one. After twelve iterations, you have your round’s hand. The next round you choose from three, and then from two, and finally you are left with the last hand of 12 cards.

You try to match the cards to maximize point value. Each card has four features – landscape, season, element, and month. Month is derived from element and season, but is still important. You can match two cards (opposite month – months that are six months apart, for examplle January and July) or three cards (by landscape, season, or element, or a combination of these). Additionally, some cards have natural phenomena or weather effects, such as a supernova or a tornado, which give you a multiplier to work with. The multiplier can be negative, so not every special card is desirable, but if you match two negatives, it does become positive, and sometimes you want to use a card even if it is negative, because you get a bonus for using all cards in a round, and that bonus increases every time you achieve it within a game. Very fun game with many factors to consider!

Finally is the “illusions” rune, which is a series of many kinds of puzzles. You choose which kind of puzzle you want to try from this selection screen, which is pretty hard to read on this screen.

They start out super easy but the difficulty ramps up pretty fast. Here are just a few examples. The first kind I tried is a simple rearrangement puzzle. They show you the target and you just rearrange to match. The only catch is, if you touch two pieces together, they become a single unit and can’t be separated. Starts out easy, but becomes trickier as time goes on. This kind of puzzle suits this screen fine.

The next one is a classic “slider” puzzle, where there is one empty space and you have to slide the pieces around to match the target arrangement. This requires a lot more concentration because instead of multiple colors, you have slight variations in shades of orange. But definitely doable.

Finally is this fairly unique puzzle. You start as one block and traverse a maze filled with other blocks you can pass through, and other blocks you cannot pass through. When you pass through a block, you become that block, and your old block becomes an impassable block, so you have to consider your path carefully. The first one was very simple to demonstrate how the mechanisms work, but by the third or fourth maze you have quite a challenge on your hands. The incomplete maze below I did pass the second or third time, but the following one (not pictured) eluded me.

And these are just three of the twelve styles of puzzles available.