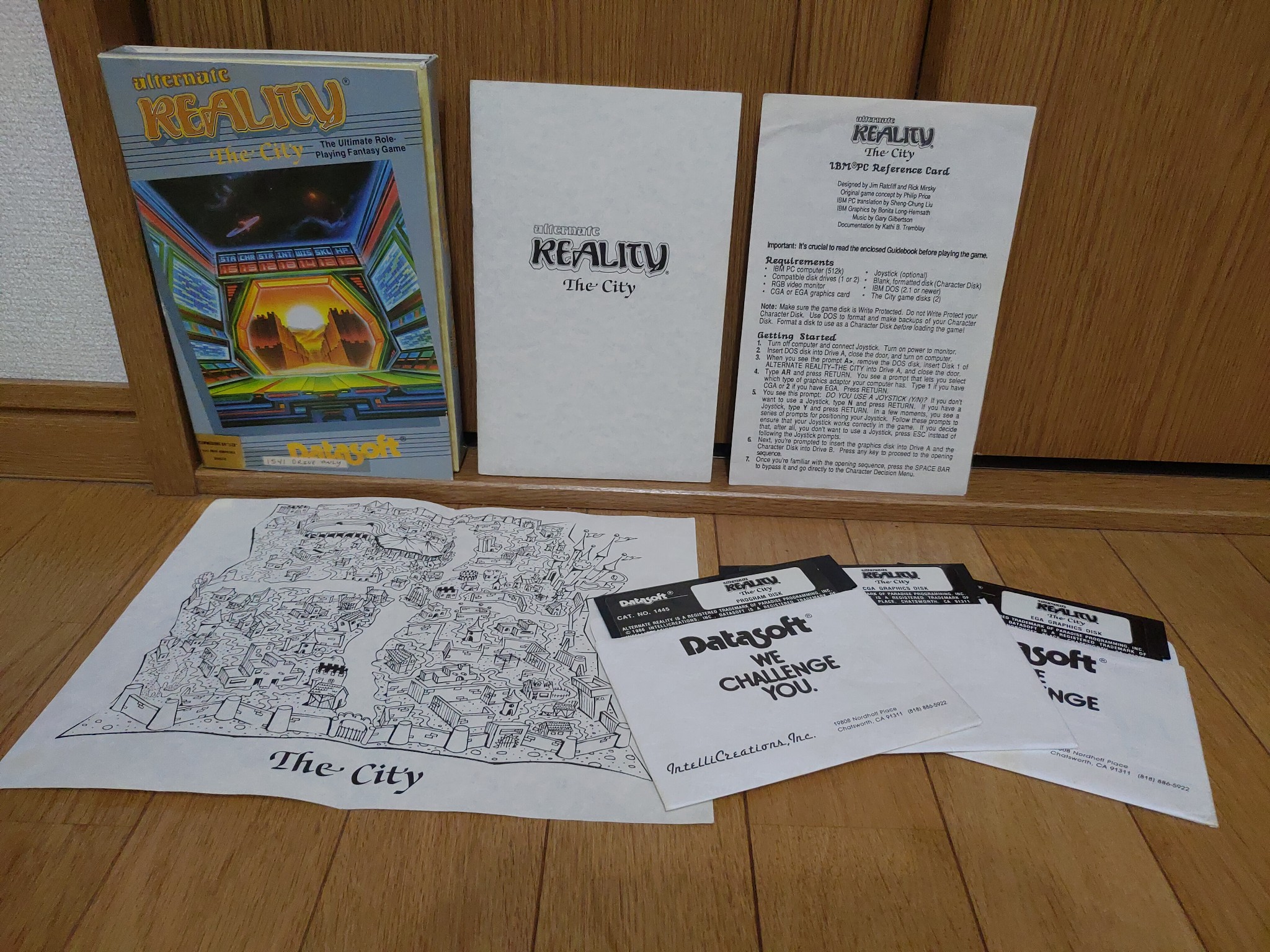 This is another game from my younger years. It’s only got an honorable mention on this blog because I played it on my Toshiba J3100 and it’s a snazzy way to show off the screen.

I say it’s from my younger years, but actually I’ve just about never played this game. Maybe a combined total of an hour or so, over several decades. But I’ve played its successor – Alternate Reality: The Dungeon – for thousands upon thousands of hours. The City is an incomplete game, it was intended to be your “home” that was set above The Dungeon. The Dungeon doesn’t really need The City to feel complete, but The City needs The Dungeon. Additionally, the Commodore 64 version has some serious problems, including lack of music.

Still, it has a place in my heart, and I’ve heard the 16-bit versions of The City are a little more complete than the 8-bit versions, so I am going to give it a bit more effort. Actually, as the PC version also lacks sound card support, I know the Amiga version is going to be the best, but it requires an A500 with no upgrades to play. It really is kind of an elusive game for me, although I know some people love the 8-bit version.

Anyway, to the game. When you load the game, it asks you if you want the EGA or CGA version. The J3100 plasma screen is driven by EGA, so I chose that. The intro screen showed up, and although the graphics are different, it is the same design as the intro screen for The Dungeon. The image made such a big impression on me back then, it was one of the best images I’d ever seen on the Commodore 64. I like it on the PC, too, but the lack of music stings. It’s followed by a starfield animation with credits and a song with lyrics, but of course the song is missing in this version.

You’re then dumped off around the City Square, where your adventure begins. So what do you do first? Whatever you want! This is an early example of an open-world game. A little too open, perhaps? The City lacks quests, while The Dungeon did not. Just explore the area, visit the establishments, and build up your character slowly.

Looking around the city, you see the sun, which changes positions based on the time of day. There is also rain and possibly other weather effects, which are absent in The Dungeon, so that’s one thing The City has going for it. There are many walls and doors, the doors often leading to establishments.

The establishments are among the expected standards for an RPG, but I feel this game offers some unexpected twists. For example, you can get a job at an establishment to earn extra money. But the jobs may have stat requirements, so you can’t just get any job, but one suited to your character. You can bargain with shopkeepers to get better prices, but if you lowball them, they may kick you out.

To level up, you have to kill baddies. But it’s far more likely you will be killed by baddies. The game is brutal in the early levels. It also has a stricter moral system than most, where killing humans, evil or good, is considered immoral, so you’re not supposed to go around fighting everyone, anyway. Proceed building your character with caution. Here are some examples of lifeforms you’ll encounter early on in the game.

So it turns out my level 0 character wasn’t quite ready to deal with an arch-mage. Who knew?

You may have noticed, but one thing about playing this game on this computer is that I can’t see my stats. I’m not exactly sure why, it would make sense if the game were SVGA, but since it’s EGA, there should be a one-to-one color mapping for the screen. Maybe my monitor ignores the intensity factor, allowing for only eight shades of orange? It’s a little hard to tell.

The PC version of the game came on three disks – game disk, CGA graphics disk, and EGA graphics disk. It included a manual and a map printed on nice quality paper made to resemble parchment. The C64 version was a little more accurate, this looks comparatively bleached, but still nice.

Anyway, I’ll end the introduction here. I could probably go on for pages about the details of The Dungeon and how the game was originally planned to be a huge series, but that’s kinda beyond the scope of this blog.