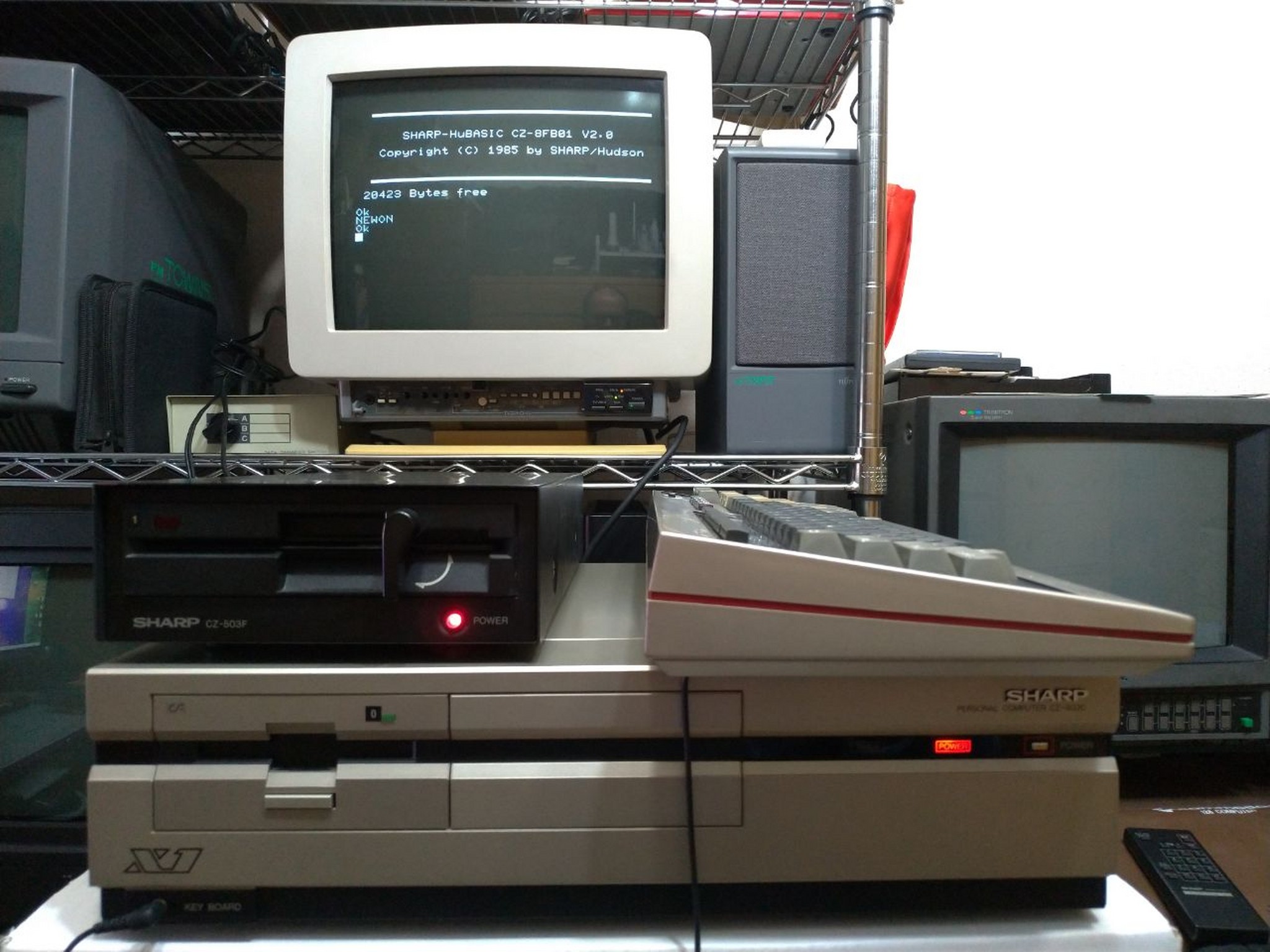 This has been an active week for my X1 systems. First, I picked up a set of two external floppy drives. There was a disk stuck in one of them, and it wouldn’t come out by conventional methods. Upon opening it, I saw that drive head was in the down position and wouldn’t come up either by the drive lever or gentle force. So I began the very technical task of poking my finger at various things, and eventually found whatever it was waiting for and it sprang back up.

After closing the drive back up, I found the jumpers (on the bottom of the drive, but semi-conveniently accessible through a special compartment under the enclosure) and set the IDs to 1 and 2 so I could connect them to my X1 D with single floppy drive. First I tried the until-recently embattled drive, by using the excavated disk. Boom, BASIC loaded. Sweet! The second drive also worked without issue.

A few days later, I got another X1 D. That one had two floppy drives, but my own X1 D was in (slightly) better condition. I removed one of the drives and placed it in my own X1 D so now I have a dual-drive system. Beauty! I used the dual-drive setup to copy the system disk, which of course can be done on a single-drive system, but goes much smoother and faster with two. I may never actually use the second drive again, though.

Getting back to the external drives, I was having a conversation with the seller through Yahoo’s transaction messaging system. I told him that the drives worked great and he told me he had some extra copied disks that were used with the system, and that he would send them to me free of charge if I wanted them. Sure! This was quite a few more than I bargained for, though, I think there must be about 100! Might have to find a discrete way to offload some of them to someone else who may use them.

I also finalized (for now!) the location of the external drives. They are on my X1 Turbo Z, which has the internal drives disabled so I can use my HxC. Re-enabling them requires opening up the system each time, so I don’t change often. But now with these external drives, it’s a breeze!

The photo came out a little dark, but if you look carefully near the bottom, you’ll see the two external drives under the FM-8, with the HxC drive emulator sitting between them.

The only shortcoming is that the internal drives are 2HD/2DD while the external ones are 2DD only. But I think all of the logic is controlled by the internal controller, so I someday may try putting the 2HD drives into the external enclosures.