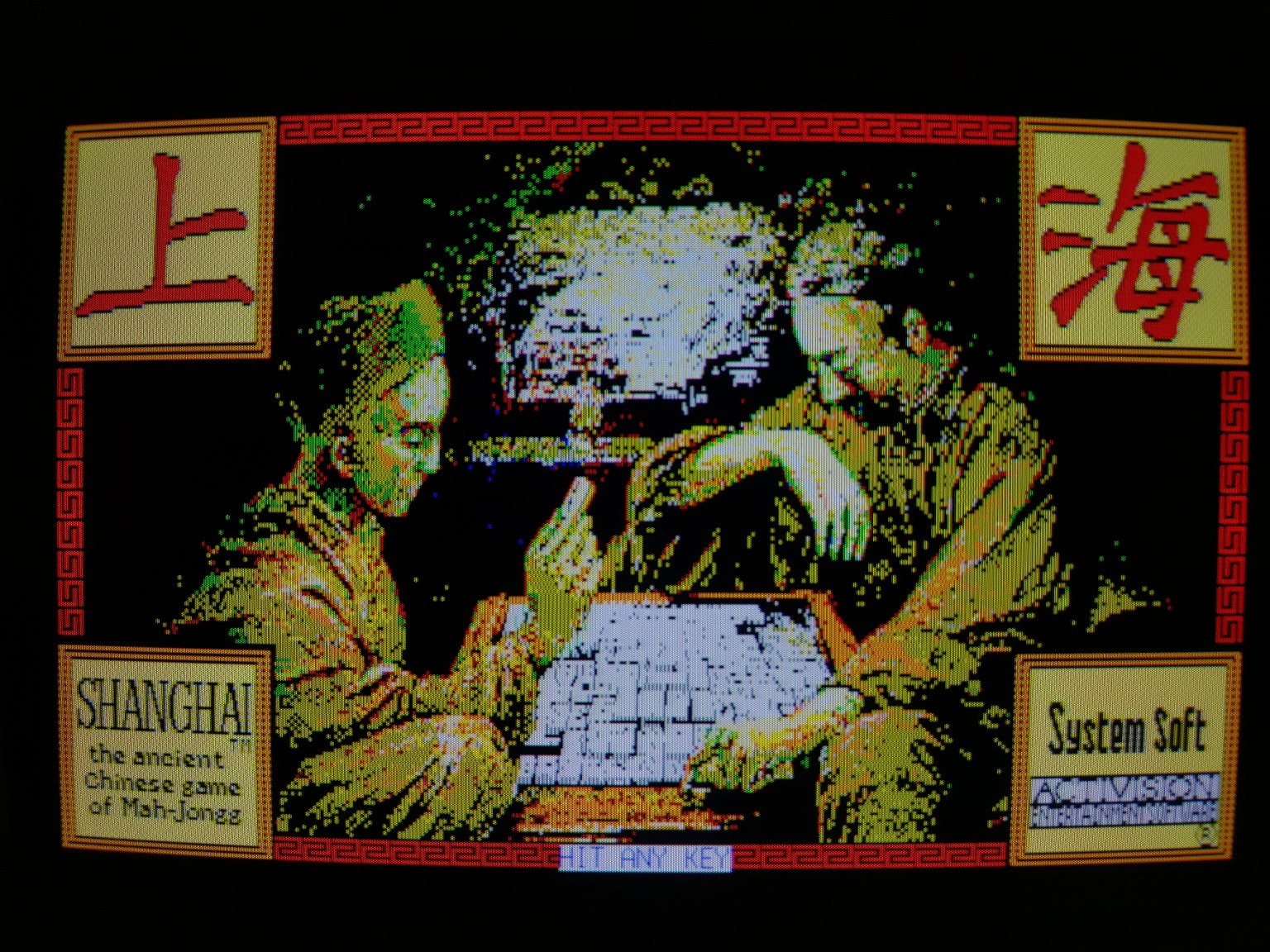 Growing up in America, I thought Mahjong was a game of picking up matching tiles. I had OS/2 and it included a game called Mahjong which was exactly that. But in Japan, Mahjong is very different, a complicated game of strategy often centered around covert gambling that I don’t even remotely understand. In Japan, what we call Mahjong, they call Shanghai, and is often played with Mahjong tiles.

This game is simple and the only sound effect it produces is a beep, hardly fitting of the machine’s multimedia capabilities. But actually, it is designed for the Turbo series. It probably works on older machines, too, but it uses two features that the Turbo series has to offer: high-res graphics mode and the mouse.

High-res graphics are not unusual for the Turbo series. But this is a shining example of how different it is. On a tile, there are a variety of objects and pictures: numbers 1 to 9 in various formats, directions (North, South, East, West), trees (orchid, bamboo, plum, chrysanthemum), etc. The high-res graphics mode offers such a crisper image that makes them much easier on the eyes.

Mouse support, on the other hand, that’s rare! The graphics tool and music composer that were included with the X1 Turbo Z both use it, but as for games, this is the only one I’ve run across so far that has mouse support. It can also be played with the joystick or keyboard, but the mouse is so much more natural for this kind of game.

Shanghai appears to be a game of mere chance and persistence, but actually there is a bit of strategy involved, too. For example, usually you have to pick up identical tiles, but the four trees and the four seasons can be matched amongst themselves, so it pays to leave those until you need to play them, so you know which ones will be most beneficial. Or if there are three of a tile free, making sure you pick the tile that will allow access to a new tile, or get you closer to a tile that you want to access. Still, there are definitely unwinnable rounds, because two matching tiles can be stacked upon one another at the end.

And finally the winning screen. I didn’t actually win tonight’s game, I got stuck at 12.5%, but I’d won and taken a picture of it before, so there it is, the reward for my persistence.

Don’t think of it as a spoiler, it looks much nicer in person! Give it a (few) tries!